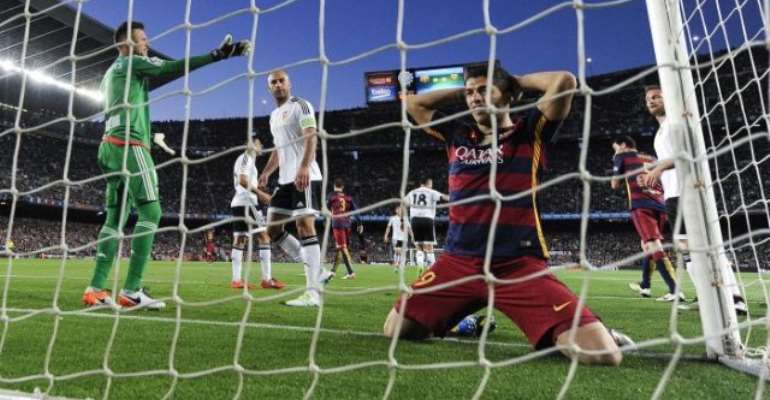 Barcelona slumped to a 2-1 defeat to Valencia at the Camp Nou to open up the race for the Spanish title.

Barca's third successive La Liga defeat, the first time the Catalans have suffered three straight league defeats for 13 years, means Luis Enrique's side only lead second-placed Atletico Madrid on the head-to-head with five games of the season to go.

Valencia, with Shkodran Mustafi outstanding at the heart of the defence, soaked up early Barca pressure before taking the lead on 26 minutes when left-back Guilherme Siqueira's shot took a sizable deflection off Ivan Rakitic and flew past goalkeeper Claudio Bravo.

Playing for the half-time whistle, Los Che then suddenly stepped up the pace as Daniel Parejo slid in Santi Mina to sweep home from the left channel for his fifth goal in seven matches.

Barcelona, who haven't turned round a 2-0 half-time deficit at Camp Nou since 1947, were handed a crumb of hope on 63 minutes when Lionel Messi broke a 550-minute goal drought from Jordi Alba's drilled cross from the left.

It was the Argentine's 500th career goal, and 450th in the colours of Barcelona.

But Valencia, superbly organised by caretaker coach Pako Ayestaran, held on and could even have extended their lead in the final moments had club captain Paco Alcacer not got his feet in a mess when unmarked in front of goal from Rodrigo's cross..