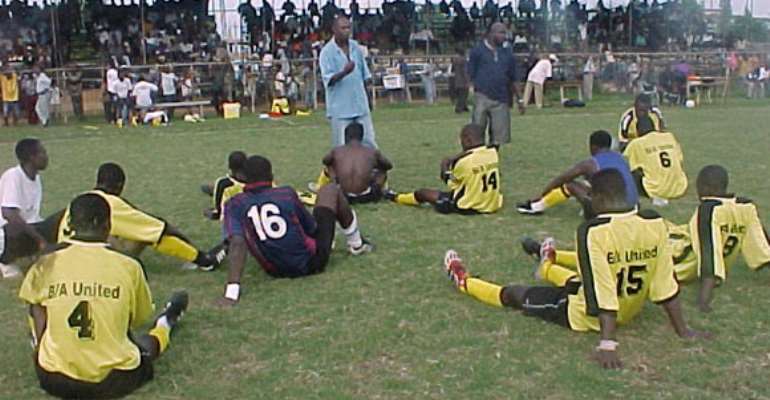 Accra, Dec 16, GNA - Supporters of Brong Ahafo United are angry with the Ghana Football Association for trying to implement relegation at the end of the just ended novelty league.

The supporters, numbering about 25, who were clad in red armbands and scarves threatened to go to court if the GFA moved ahead to relegate their club.

Speaking to the GNA Sports on Thursday, Mr Thomas Barnie, a spokesman for the group said they would not sit down and see their club go down after an inconclusive league that did have a national character. He said it would be an act of "gross injustice and cheating if any club is relegated because instead of playing 30 matches, the teams played only 14 and some of them did not meet others so it will be difficult to measure the strengths and weaknesses of all of them." Mr Barnie said apart from the league lacking a national character, it was fraught with numerous discrepancies as some teams had to play their mid week matches on Thursday and play again on Saturday in order to meet the CAF deadline.

The spokesman said BA United had recruited young promising players who needed time to gel and their performance at the latter stages of the league showed that if a full course league were to be played, they would win most of their second round matches and finish at a respectable position.

The supporters called on the leadership of the Ghana League Clubs Association not to sit down and watch the clubs suffer unjustly but to go to their aid as their true representatives and compel the GFA and the Professional League Board to rescind the decision on relegation and expand the premier league in the interest of justice. "GHALCA should protect the interest of the clubs and this is a test case for them and we are waiting to see if they care about us," Mr Barnie said.

Amid shouts of BA, BA, BA, the spokesman called on the Mr JH Mensah, Senior Minister to intervene and persuade the GFA to expand the league without relegating BA United and Great Olympics as the league was not a national one and all the clubs did not play each other, adding that Ghana is a circular state and a football league must involve all clubs with the same opportunity.