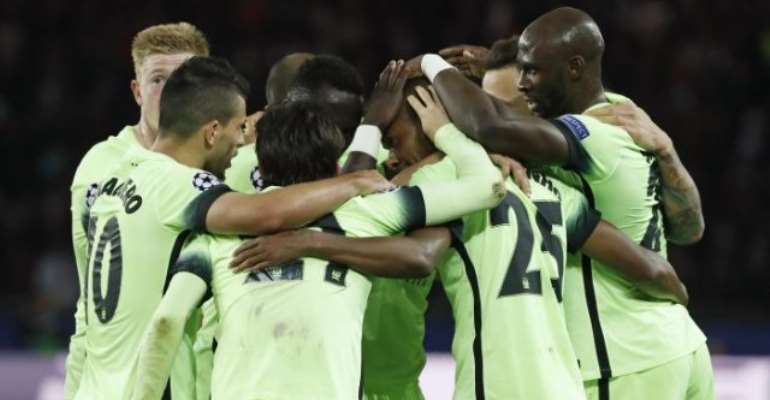 The Premier League side, who have never advanced this deep into Europe's top club competition, will fancy their chances in the return leg after an entertaining affair at the Parc des Princes.

PSG had a shout for a red card and a penalty in the opening moments when Blaise Matuidi, played in behind the City defence, went down in the box after a challenge from Eliaquim Mangala from behind, though the referee waved play on.

PSG had a golden opportunity to open the scoring in the 14th minute. From a corner, David Luiz settled a deflected clearance and was taken down by Bacary Sagna after some quick foot-work at the top of the box.

Zlatan Ibrahimovic's resulting spot-kick was well-saved by Joe Hart, who went low and to his right to keep the Swede's powerful strike out of the bottom corner.

Ibrahimovic then had a second guilt-edged miss 10 minutes later. A Nicolas Otamendi giveaway fell to Thiago Motta, whose through ball played in Ibrahimovic one-on-one against Hart with time and space to work with, but the the former AC Milan man shot completely over goal from 18 yards out.

Manchester City punished the hosts' wastefullness in the 38th minute with a swift counter-attack. Fernandinho's strong run from midfield found De Bruyne, who powered his right-footed shot past Kevin Trapp from the right side of the box.

PSG bagged their equaliser in bizarre fashion three minutes before the break. Joe Hart's pass out from a goal kick found Fernando who, while being closed down by Ibrahimovic after a poor first touch, played his pass off the forward's outstretched foot and straight into Hart's empty net from just outside the box.

PSG took the lead 14 minutes after the break. The Parisian side worked possession for a corner. Angel Di Maria whipped in a cross that was headed directly at Hart by Edinson Cavani. The England goalkeeper then spilled the catch straight into the path of an onrushing Adrien Rabiot, who slotted inside of City's near post.

Fernandinho gave City the equaliser in the 72nd minute. Serge Aurier's failed clearance of a Sagna cross rolled into the Brazilian's path, whose lashed right-footed effort took a deflection before trickling into Trapp's net.