Ghana football: The battle line has been drawn between the Sports Ministry and GFA 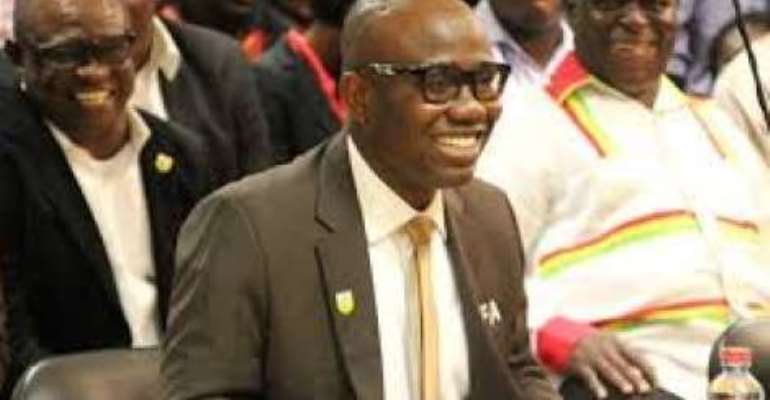 The Youth and Sports Ministry under new minister Nii Lantey Vanderpuye has resurrected some old wounds between the Ghana Football Association and the Ministry, after several decisions went against the GFA before and after the Black Stars 3-1 victory over Mozambique on Thursday.

Nii Lantey  Vanderpuye must be commended for sitting the  Black Stars down to accept a cut in their winning bonus for the win against Mozambique, after he explained the economic situation the country finds itself in makes it difficult to meet the $10,000 it used to pay.

Meanwhile he has also suspended the winning bonuses of the Black Stars management committee, a practice that has come to stay for years under different governments, stating that the GFA members need to persuade him on the need to pay management committee member bonuses.

Prior to that the GFA members had used their pocket monies to buy tickets to watch the Ghana-Mozambique game, after  their acting secretary Ike Addo got angry over the delay of the Ministry of Sports and the National Sports Authority to issue complimentary cards due them for attend the game.

Following his appointment as the Sports Minister, Vanderpuye made it clear that he is aware of certain malpractices in the administration of Ghana football and he won't hesitate to make them right.

It would be recalled that during the era of President John Mills, Nii Lantey Vanderpuye who was very close to the presidency was one of the people who had issues with the GFA and there were reports that  he and others were the ones behind the decision of government to throw their weight behind Abedi Pele for the CAF Executive Committee position.

Although Nyantakyi later got the government's backing, it created some friction between the GFA and the Sports Ministry.

All attempts by various Sports Ministers to subdue the powers of the GFA have failed, but it seems Nii Lantey Vanderpuye has gotten the backing of the President to act in a way that would relieve government of much of the financial burden that arises in the running of the Black Stars.

The former Sports journalist is going all out to tackle the GFA in a manner that would make the Sports Ministry more powerful than before.

The action to suspend the winning bonuses of the GFA, which could lead to its cancellation, is likely to trigger much tension in Ghana football

The GFA's action to buy their own tickets has influenced the decision of the Sports Minister to reconsider making it a rule that all GFA members, Sports Ministry and the National Sports Authority should buy their own tickets without any complimentary cards in subsequent Black Stars games, to reduce the financial burden on government in the running of the Black Stars.

As an adage goes when two elephants fight it is the grass that suffers, and in this case it is the Black Stars and other national football teams of Ghana who will pay the price when the GFA and the Youth and Sports Ministry fight.

We are heading towards the election and for the people of this country to be happy and forget the pressure that electioneering campaigns bring on the people, there should be a good atmosphere in the footballing world.

Vanderpuye is doing a good job with his ideology to revolutionise sports in the country, however, he needs to develop cordial relationship with the Ghana Football Association, since together we stand, but divided we fall.

The Black Stars, until the recent fiasco in Brazil 2014 FIFA World Cup were the heartbeat of the nation, but after the team's abysmal performance in Brazil coupled with the boycott of training sessions prior to their last group game against Portugal, the team were declared as persona non grata by  the majority of Ghanaians.

To restore the love Ghanaians have for their senior male football team there is the need for  peace in order to help the team put up good display to bring smiles.

There should be ceasefire, because it is early day into the administration of Nii Lantey Vanderpuye for some of these developments to emanate.