Afcon 2017: Equatorial Guinea go out after defeat to Mali 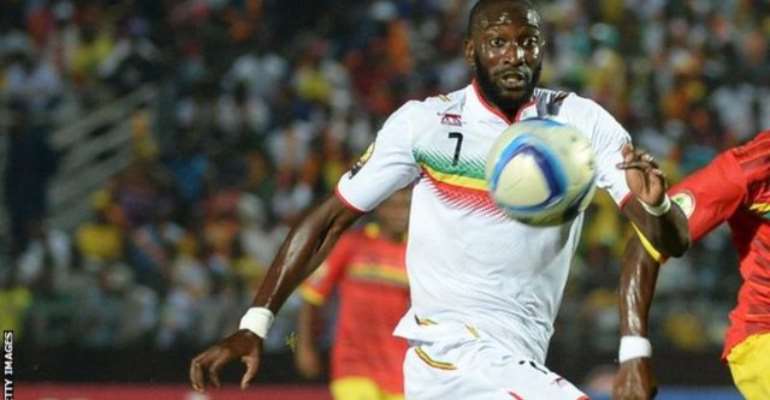 Equatorial Guinea, who hosted last year's Africa Cup of Nations, became the first team to be eliminated from the qualifiers for the 2017 tournament in Gabon after a 1-0 home defeat to Mali.

Mustapha Yatabare hit Mali's winner in the 89th minute in Malabo to put his team top of Group C, two points above Benin on 10 points.

Equatorial Guinea, who reached the semi-finals on home soil in 2015, are now bottom of the group on one point with two games to play.

South Sudan are third, on three points, and still have a slim chance of qualifying as one of the best two runners-up.

Elsewhere on Monday, Zimbabwe swept aside Swaziland 4-0 in their 2017 Africa Cup of Nations Group L qualifier.

The hosts, who earned a 1-1 draw in Swaziland on Friday, dominated the return match in Harare to move three points clear at the top of the table.

Knowledge Musona opened the scoring on 53 minutes from the penalty spot and Costa Nhamoinesu made it 2-0 six minutes later.

Evans Rusike extended the advantage and Khama Billiat sealed the win late on.

Musona told BBC Sport: "I am feeling very happy. The team collected maximum points at home, we are top of the group and we have a big chance to qualify.

"It is crucial we take maximum points from our next game at home (against Malawi on 3 June)."

Swaziland remain on five points, three points above Malawi and Guinea who play each other on Tuesday.

Each of the group winners and the two best runners-up qualify for next year's finals in Gabon.

In Group B Central African Republic came back from a goal down to beat Madagascar 2-1.

Faneva Andriatsima opened the scoring for the visitors on 35 minutes and they went into the half-time break 1-0 up.

But two goals in 12 minutes turned the game on its head as Salif Keita stuck the equaliser on 53 minutes for CAR and then Limane Moussa hit the winner.

The result puts CAR top of the table by a point from DR Congo, who play Angola on Tuesday.

Libya got their first points of Group F with a 4-0 win over Sao Tome e Principe.

In a match played in Egypt on security grounds, Libya's Mohamed Zubya hit a second half hat-trick.