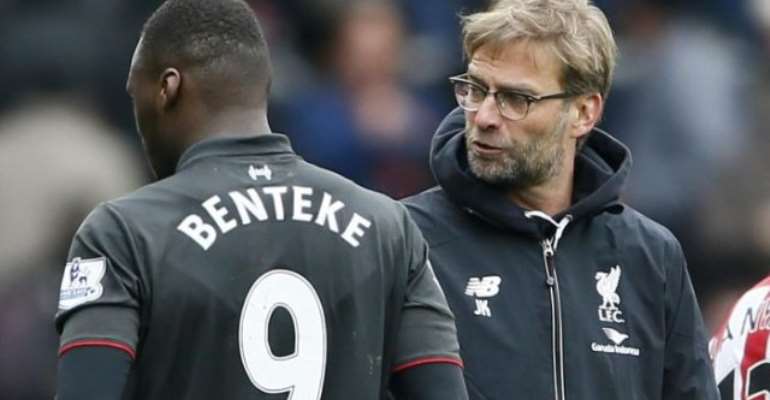 The Belgium international has scored just eight goals in 35 appearances with only one of them coming in 2016 - and that was a penalty.

He has made just five starts in 16 matches since the end of December as Klopp has preferred a fit-again Daniel Sturridge and Benteke's compatriot Divock Origi.

At the end of Sunday's defeat at Southampton the Reds boss was seen in animated discussions on the pitch with the £32.5million striker signed in the summer by predecessor Brendan Rodgers.

Benteke has risked making that relationship worse but he insists he wants to succeed at Anfield despite speculation linking him with a move away.

"Some team-mates have said that I was lucky with the arrival of Klopp, because I certainly would play," he told Belgium's Sport/Voetbalmagazine. "When your coach says he wanted to take you to Dortmund and a little later you sit at the same club and he ignores you it is hard to understand."

Benteke's apparent unsuitability for Klopp's intensive, high-pressing tactics has been debated for some time but the player rejects accusations he cannot fit in.

"I find it bizarre, I do not understand why people say that," he added. "I can play pressing and moving a lot. It is not that we play in the Barcelona style.

"In January I didn't want to leave and it's still my desire to succeed at Liverpool. We'll see at the end of the season."

West Ham's interest in Benteke has been rumoured for several weeks and co-chairman David Sullivan has publicly confirmed it, although he admits the player's salary would be a problem.

"The problem is he is on such a huge wage that no club can afford him but he is a player that we admire," he told The Mirror.

Goalkeeper Simon Mignolet offered support to his team-mate for club and country.

"Everyone knows his qualities," he told Belgian TV station Sporza.

"When you're a footballer you want to play in all the matches and it's not easy when you're on the bench.

"He's continuing to work hard at training and for his place. He does his best every day."