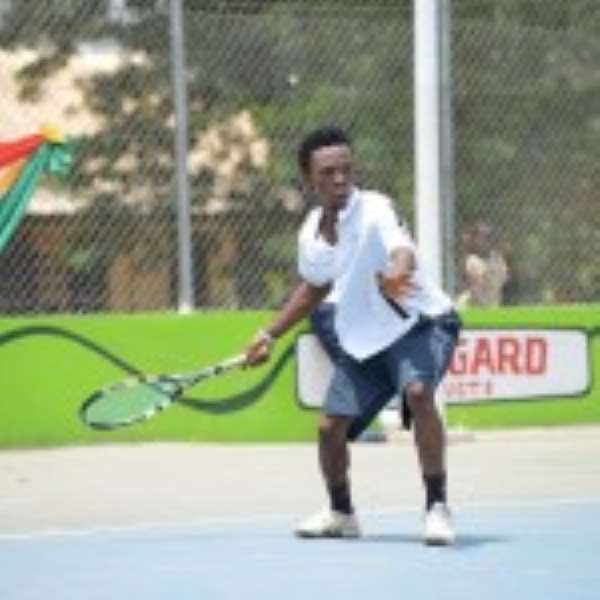 Francis Akpese, who is in top form, is expected to cause sensation during the tournament

ALL ROADS will lead to the 4 Garrison Officers Mess Tennis Club in Kumasi(Oseikrom) where the second edition of the National Tennis Ranking Tournament will take place from March 26 to April 2, this year.

About 50 crack tennis stars from the length and breadth of the country are expected in Kumasi during the one-week period where they would lock horns to determine the best tennis stars, currently in the country.

It is the first time that the important tennis tournament is being moved from its original base of Accra to the Garden City and connoisseurs of the sport believes the move would help boost tennis growth in Kumasi and the northern sector.

Mr. Isaac Duah, vice Chairman of the Ghana Tennis Federation, disclosed that the tennis tournament is being moved to Kumasi, due to the strong interest and support it gained from corporate institutions in Kumasi, lately.

He expressed hope that the transformation that tennis had gained in Asanteman during the past few years would be sustained adding that Ghana stands the chance of winning tennis laurels in the international stage, soon.

.
The results of the ranking tournament are always sent to the International Tennis Federation for international ranking. The tournament which enjoys huge patronage usually attracts high profile personalities.

The Chairman of the Ashanti Regional Tennis Association, Mr. Kwasi Agyeman Gyamibi disclosed that the region was proud to host its first national tennis tournament.

The people of Asanteman, he said, have contributed greatly to the game of tennis so it was prudent that the region was chosen to host this tournament, urging corporate institutions in the region to continue to sponsor the sport.

Dubbed 'Babolat National Tennis Ranking Tournament', the event is sponsored by Ismaila Tennis and Sports Shop, the official agent of Babolat in Ghana. It is also supported by McDan Shipping Company Limited.

No country is immune to terrorist attacks; let’s fight it – ...
45 minutes ago

Claims of insecurity in Ghana over recent crimes ‘a bit of a...
49 minutes ago