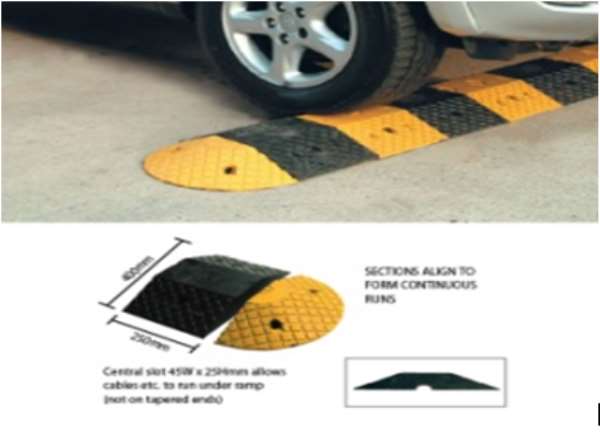 Managing traffic with a speed ramp is one of the most effective and inexpensive methods of protecting people and property from the dangers of speeding vehicles. This method has worked so well in many parts of Accra the capital city of Ghana, especially the ramps in the new Achimota bus terminal and other town roads.

However due to lack of enforcement of standards in creating speed ramps, we see many speed ramps that can be described as killer ramps. A visit to Ashongman Estates, off Dome and Atomic Down Accra, in front of the Community Hospital would reveal speed ramps with pot holes with small stones pointing up as pins.

These ramps are meant to check speeding on the road but they can rather cause damage to car tyres. Among questions begging for answers are, were the ramps built by qualified workers under the supervision of qualified engineers? If not have the officials of the Ga East at Abokobi seen the ramps? I believe by now they have seen them, therefore there is the need for action to be taken to put them right. If the ramps were built by private organizations those organizations must also be up and doing by repairing the poor ramps.

A study has shown that the ramp's steep of 7cm-high profile, slows vehicles down to extremely safe speeds of between 2 and 5 miles per hour. Offering the biggest reduction in speed of all our ramps, the 5mph speed bump is ideal for use in areas where there are lots of children present, like school zones and residential streets. All those building raps must follow the above lead.

Apart from the ramps, the Ga East Assembly in Accra has a lot to do to rectify flaws on the roads at Ashongman Estates. The road from Aggie Spot to the Abom Junction and the little portion leading up to the last stop were tarred a few months ago but the entire portion of the roads have developed pot holes leading to road workers being drafted to fill the pot holes on them to the worry of drivers who are forced to use portions of the blocked roads.

The DCE and Those engineers in charge of the road construction must sit up else their poor and shoddy works would lead to extra expenditure on the road works. The Ga East Assembly must not relent but do more by working hard to expand the road form Atomic Junction to Dome Saint John’s junction.

This is meant to ease traffic from Dome Market right through the rail crossing old station to Atomic Down. Travelling on these routes though short is nightmarish that needs to be checked. We are heading towards the rainy season during which the Dome Kwabenya Constituency like other parts of Ghana will experience heavy rains. The hilly parts of the area would be generally safe as usual but those people living downstream would definitely suffer floods due to lack of large gutters or drainage systems to carry the water away. The area around Warren Petrol station formerly Gambo is always the hard hit as the flooding do cause the blockade of the road t motorists.

The East Assembly must do well to create a larger drainage and see to get all those who have put up structures on water ways in the areas to remove them. One thing that is disheartening is the activities of vulcanizars and those selling lorry tyres along our roads. These people are guilty of besmearing our roads with dirty oils and garbage while at the same time encroaching parts of the roads. Just visit the area close to the Dome old Station lorry park and the road opposite the Community Hospital at Ashongman Estates Accra where gutters across roads have been taken over by vulcanizers or tyre menders.

One other thing that requires urgent attention is the lac of urinals that need to be created in vantage points to serve travelers and citizens who move from one part of the country to the other. It is disheartening to find people especially men shamelessly urinating indiscriminately in street corners, sometime displaying their manhood. Apart from the smell the urines emit the urine could cause health havoc. The District Assemblies especially the Ga East must take a hard look at this situation with the view to finding lasting solution to it.