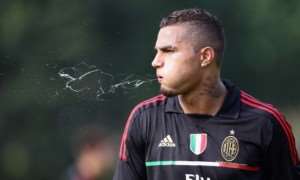 
AC Milan manager Sinisa Mihajlovic has confirmed midfielder Kevin-Prince Boateng is not fit to play full 90 minutes for the club.

Despite featuring five times for Milan since his return to the club in January, the 28-year-old has played only 77 minutes and exclusively used as a substitute.

Boateng endured a frustrating spell at German side Schalke 04, leading to his sacking last year.

"As for Boateng, he can't be used from the start [of the match]. He just needs to play to recover form, you can see it's not him now, he's just doing what he can." he said

Boateng is lacking match fitness and played a cameo role for the side in their 1-1 draw with Udinese who featured compatriot Emmanuel Agyemang Badu.