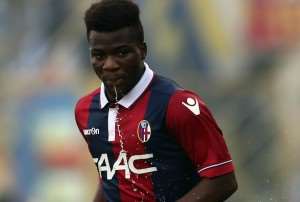 At just 19, the ex-Ghana youth star has been at the heart of a fabolous run for the Italian side this season.

The Ghanaian masterminded yet another goal in Bologna's 1-1 stalemate with Fiorentina over the weekend.

The Ghanaian scored for Bologna in their 3-2 win over Sampdoria last week and he has been quick to credit coach Roberto Dondadoni for his purple patch of form.

'Personally, I am happy Donadoni is motivating me and I feel fine on the pitch,' Donsah told his club's official website.

Donsah has made 12 appearances for the Rossoblu since joining from Cagliari last summer.