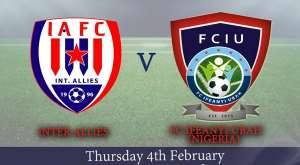 
Ghanaian side Inter Allies have confirmed they will play Nigerian side Ifeanyi Ubah in an international friendly on Thursday.

The ambitious Ghanaian side are taking advantage of the availability of the Anambra Warrios in the West African nation to test their mettle ahead of the start of the new season.

Inter Allies have now confirmed a friendly date against their West African rivals at the Tema sports stadium on Thursday morning.

It's a friendly against Nigeria's @FCIfeanyiUbah at the Tema Stadium on Thursday @ 7:00am #iafc pic.twitter.com/BVpKfeVDJW

The Tema-based side will take on Aduana Stars in their opening 2015/16 Ghana Premier League campaign on February 21.