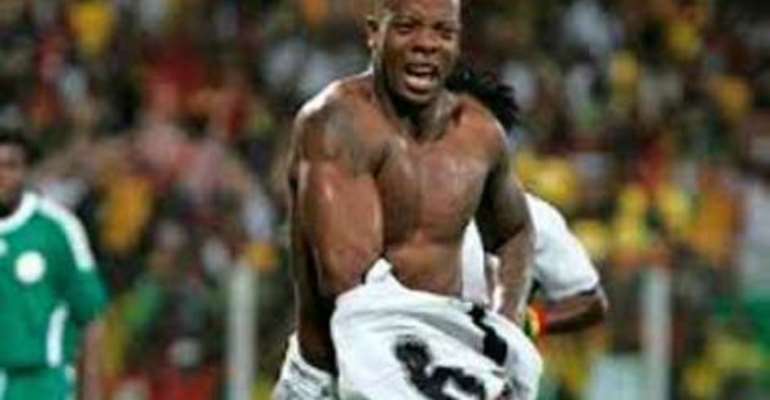 Tenacity, resilience and total commitment on Sunday, 3rd February, 2008 won the Ghana Black Stars a berth at the semi-finals of the 26 edition of the Africa Cup of Nations (AFCON) at the expense of Nigeria Super Eagles.

It was indeed a test of character for the team as well as the much touted "host and win agenda" as the Stars rose to the occasion to record a sweet 2-1 victory over their archrivals.

For the first time, the Stars had to come from a goal down, scored in the 34th minute through a penalty converted by Yakubu Ayigbeni and had to play 31 minutes of the game with 10 men following a 59th minute red card dished out to skipper John Mensah by Algerian referee Benouza Mohamed.

Backed by the unrelenting, vociferous and partisan fans throughout the game. The Stars sent the entire stadium into wild jubilation en-route to nightlong partying when Junior "Ga Mantse" Agogo's connection to Sulley Muntari's cross eight minutes to the close of the game gave the Ghanaians a deserved victory.

The Nigerians had clearer chances of scoring in the early minutes when Yakubu Ayigbeni rounded Eric Addo in front of the 18-yard box only to deliver a feeble shot that Richard Kingson had no difficulty in dealing with.

The Stars took up the challenge and stormed the Nigerian defence with Muntari leading the onslaught and nearly fetched the opener when Skipper Joseph Yobo's attempt to clear a cross nearly misdirected it into his own net 13 minutes on.

It then became a balanced battle, as both sides continued to search for the opener, with Agogo coming close in the 25th minute when he beat an offside trap, raced into the defensive third, only to have his shot tipped over the bar by Austine Ejide.

The search for the lead continued till the 34th minute when Anthony Annan's challenge on Ayigbeni resulted in a penalty. Ayigbeni had no difficulty in converting the resultant penalty to silence the partisan crowd.

But on the stroke of the first half, Michael Essien rose above the Nigerian defence with a glancing header to Quincy Owusu Abeyie's cross, which hit the upright before rolling into the net for the equaliser attracting wild jubilation.

The Nigerians could have taken the lead as a result of a goalkeeping error on the part of Kingson whose headed clearance saw him off his line for Ayigbeni to intelligently volley it over but the goalie ran back quickly to save the situation.

Ghana was, however dealt, a big blow 15 minutes into the second half when skipper Mensah was sent off, to reduce the Stars to 10 men. Coach Le Roy was compelled to shuffle his team by assigning Essien a central defensive role, as Annan took over the real midfield job. However, the introduction of Laryea Kingston and Haminu Draman brought added urgency into the Stars game and it was obvious that the Ghanaians were capable of securing the much-needed victory.

A swift attack launched in the last quarter of the game saw Dramani dashing deep into the Nigerian defence, where he located Muntari whose short cross was tailored to the goal line of the Nigerians for Agogo, to slot in the winner in the 82nd minute.

A similar attack led by Dramani three minutes later was wasted by Kingston whose curler at the edge of the box missed target narrowly. The Nigerians threw everything into the game and searched fruitlessly for the equaliser but the 10-man team, taking inspiration from the partisan crowd, stood firmly and defended the lead till the close of the game.