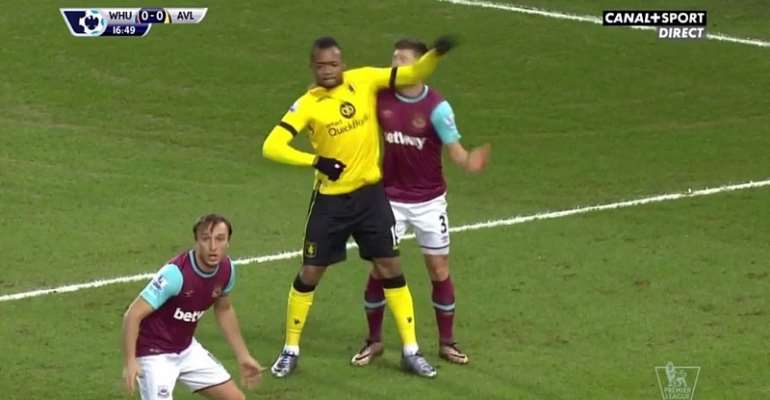 Jordan Ayew was caught using his elbow to attack an opponent

Ghana striker Jordan Ayew was subjected to shocking insults on Twitter as the Aston Villa attacker was sent off in disgrace as Aston Villa during Tuesday night's 2-0 defeat at West Ham.

Villa fans attacked the Ghanaian as a 'wanker', 'cunt', 'clown' and 'twat' after the dismissal of Ayew was directly linked to their defeat.

Ayew left his struggling side in the lurch when he was dismissed for a vicious elbow into the face of Aaron Cresswell after just 17 minutes.

It was utterly mystifying when Ayew, who was jostling for position with Cresswell from a throw-in deep in West Ham territory, swung out his elbow into the defender's face and left him sprawled on the floor.

Referee Jonathan Moss produced a straight red card and Ayew trudged off to leave his team-mates facing a long evening a man down.

This sparked anger among Aston Villa fans who thought the Ghanaian had led his side down as they were then dominating the exchanges with the score goalless.

Below are some of the insults on the Ghana striker after his red card in Tuesday's match.

@AVFCBlog Jordan Ayew should be fined a months pay, what an absolute cunt he was tonight. No thought for the team, it's all about him, twat

— Ncc415 (@Porkyboxster) February 2, 2016
Ayew has just relegated us. Any slight hope we had has just been erased. And I bet he'll be the first to jump ship as well. #avfc

What a disgrace Ayew is. He needs a hefty fine and a kick up the ar*e. Wouldn't surprise me to see Garde walk soon. #WHUFCvAVFC — Max Harvey (@M4XWELL1) February 2, 2016

Ayew has been our most consistent attacking threat (at times our only threat). Made a poor decision today. Not gonna slate him for it. — Chet Manley (@AstonVillanUSA) February 2, 2016

Jordan Ayew was stupid. Coach should hose down the goat

If Villa showed half the effort they had tonight this season they'd of been alright! Ayew absolute heads gone!

Hope ayew gets fined 3 weeks wages, travelled all that way for that petulant fool to ruin it. Idiotic

Ayew should reimburse all the fans tonight. Travel down to London when we're 10 points gone and he does that in the 17th min!? @AVFCOfficial

@AVFCOfficial without Ayew for 3 games is a big loss! Relegation will be confirmed in March!! #VillaRelegated — Adam Stordy (@AJStordy2) February 2, 2016

Has Jordan Ayew got special needs? What the fuck was he thinking? #AVFC