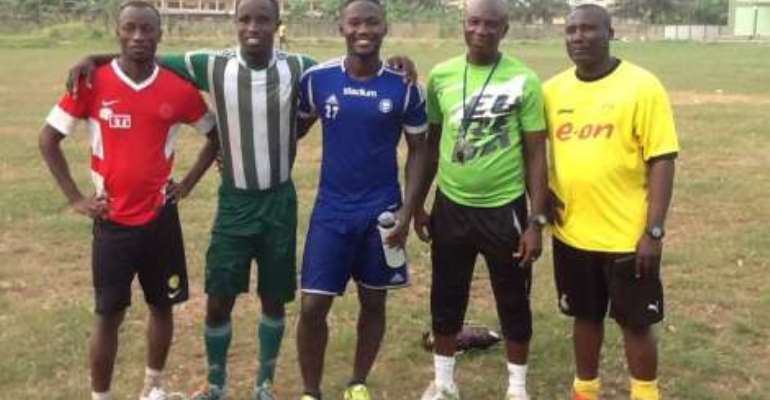 Sekondi Hasaacas welcomed their star player signings at their training on Monday afternoon as Eric Bekoe and Ernest Papa Arkoh together with the promising youngster, Saliw Babawo joined the team at their Chapel Hill training park as they prepare for the forth coming league season.

The trio arrived in Takoradi on Sunday evening, building the fans' anticipation to visit the team's training to catch a glimpse of their big name players and some did turn up. The media attendance was also massive which showed a new ambience on the day.

Bekoe, a former top scorer of the league with Kotoko signed a one year contract with the Giants of the West to revive his career and his new coach, Yusif Basigi is happy about Bekoe and the others who have joined his team.

"In fact it's exciting that Eric Bekoe and Papa Arkoh has joined the team because looking at the time some of our key players left the team, many were those who were disappointed because they realized we have lost a lot of good or quality or key players but when these players joined we've had some sort of relief which I believe with little time they will blend and cope with the rest of the team" he intimated.

Basigi is also looking forward to a season of attacking fire power with the recruitment made. He said "Now we have Eric Bekoe, Samuel Afful is also around, we have Prince Papa Arkoh, then Fatau Mohammed will come and Kojo Poku is there too so I think we have a good bench in terms of attack and its good we have  strengthen the attack".

For now Basigi is awaiting the arrivals of Philip Boampong, Fatau Mohammed, Eric Adu Poku and Michael Abu to have his full squad.

Free SHS Graduates Gather To Campaign For NPP
22 minutes ago