By ghanasoccernet.com
Listen to article

United actually made no attempt to stop Guardiola's move to City and have been prepared for the announcement for months. (Sky Sports)

Daily Telegraph sports page Guardiola is already the best-paid manager in the world, but his £15m-a-year deal with City is an increase on his salary at Bayern Munich. (Daily Mail)

The Spaniard will become the highest-paid man in the Premier League - player or manager - after being offered a £21m-a-year contract. (Sun)

Guardiola will be given £150m to spend on players when he replaces Chilean Manuel Pellegrini. (Guardian)

Pellegrini's next job could see him remain in the Premier League with Chelsea, who spoke to the 62-year-old before bringing Jose Mourinho back to the club in 2013. (Daily Express)

City also want Ballon d'Or winner Lionel Messi, 28, to join Guardiola at the Etihad and are putting together a £120m deal to tempt the forward. (Sun)

Messi will miss the Olympic Games in Rio in the summer as Argentina boss Gerardo Martino says the player needs some rest. (AP)

The club will allow Guardiola to try and sign Juventus' France midfielder Paul Pogba, 22, who is rated at £80m, and Everton's 21-year-old England defender John Stones for £50m (Daily Mail)

City are planning an expensive summer overhaul of the squad with defender Eliaquim Mangala, 24, and Wilfried Bony, 27, poised to be sold. (Telegraph)

Other deadline day gossip
Chelsea captain John Terry, 35, has been offered a move to the Middle East as talks between his advisers and Qatar side Al Arabi - managed by Gianfranco Zola - have taken place. (Daily Mirror)

Former England captain Terry could earn £20m by playing just one season in China, although a move to the MLS is also a possible destination. (Telegraph) 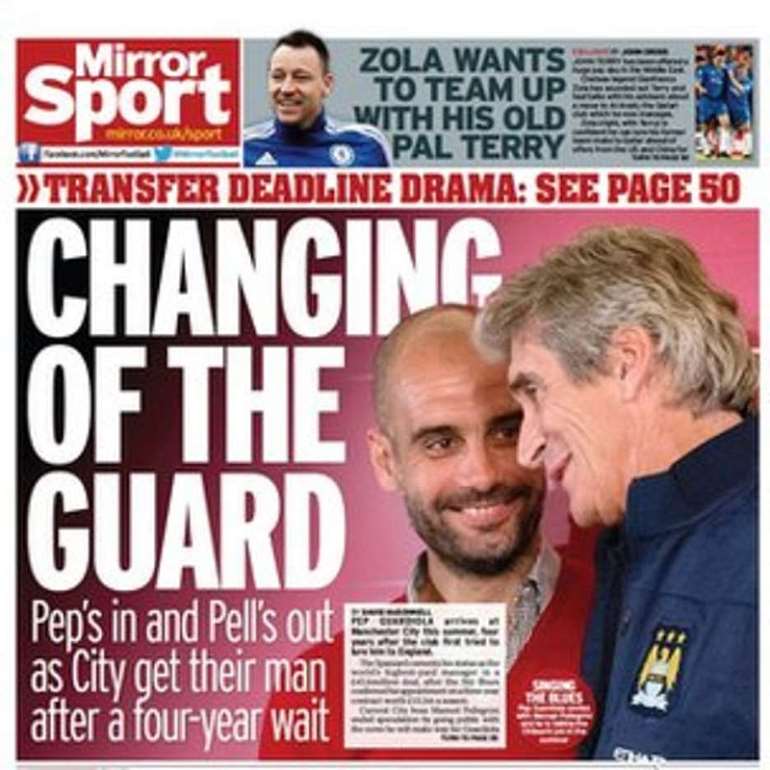 Daily Mirror back page Times journalist Henry Winter believes Chelsea will look to Italy for their next manager - hinting that he thinks Italy head coach Antonio Conte will get the job. (Listen to clip on BBC Radio 5 live)

Aston Villa manager Remi Garde is prepared to walk out on the club this summer after they failed to sign any of his January targets. (Daily Star)

Surprise Premier League leaders Leicester missed out on signing striker Loic Remy, 29, after Chelsea decided not to allow the France international to leave on a loan deal. (Leicester Mercury)

Barcelona are considering a move for United midfielder Juan Mata, 27, and initial contact has been made between the La Liga club and the Spain international's representatives. (Daily Mail)

West Brom chairman Jeremy Peace rejected a £24m bid from Newcastle for striker Saido Berahino, 22, even though the offer was straight cash being paid up front. (Daily Mirror) 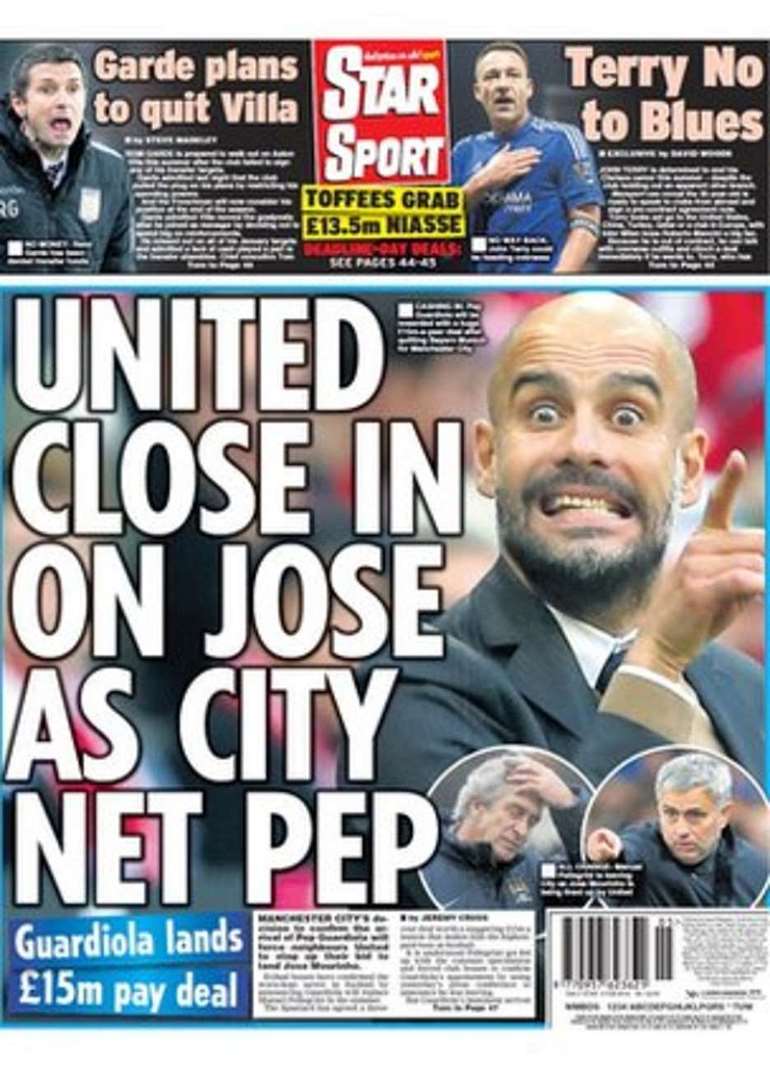 Daily Star back page Premier League strugglers Swansea were approached about the possibility of signing Brazilian Robinho, 32, who is a free agent after leaving Guangzhou Evergrande. (South Wales Evening Post)

Liverpool full-back Jose Enrique, 30, rejected a move back to former club Newcastle, preferring to see out the remaining five months of his Anfield contract. (Daily Mirror)

However, it was Newcastle who actually ended their interest in Spaniard Enrique after discussions about the players' contract demands. (Chronicle)

Aston Villa missed out on signing Hajduk Split's 6ft 7in goalkeeper Lovre Kalinic, 25, after the Croatian was denied a work permit and two subsequent appeals to the FA failed. (Birmingham Mail)

Serie A side Lazio blocked moves from Villa and Bournemouth to sign midfielder Ravel Morrison, 22, who will now remain in Italy until the end of the season. (Talksport)

Social Media
Saido Berahino landed himself in trouble at the end of the summer transfer window when he criticised West Bromwich Albion chairman Jeremy Peace for not sanctioning a move to Tottenham Hotspur. This time around he kept his counsel and settled for an early night after the Baggies again decided to hang onto the England Under-21 striker.

Saido Berahino attracted interest from Tottenham, Newcastle and Stoke during the transfer window

And finally
A journalist was harassed by a fan with an inflatable banana while covering deadline day for Italian television, but got his own back by using the inflatable toy against him. (Metro)

The police officer who posted a photo of Barcelona forward Lionel Messi's passport online has been sentenced to a month in prison. (Sun)

Manchester United winger Memphis Depay has been spotted on a shopping trip in Cheshire with a trolley full of water and toilet paper. (Daily Mirror)