Kotoko pull out of international friendly against Nigerian side Ifeanyi Ubah 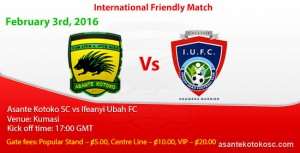 
Kotoko have chicken out of Wednesday's hugely advertised friendly against Nigerian side Ifeanyi Ubah.

The Porcupine Warriors were scheduled to play their West African counterpart at the Baba Yara stadium.

But the Ghanaian giants have canceled the friendly over claims arrangement has hit a rough patch at the last hour.

Kotoko pulled out of a similar friendly against Medeama last Sunday over claims the fixture was too close to the start of the Premier League.

The Kumasi-based side recorded a 2-0 win over Bechem United in their latest friendly on Sunday.

Ifeanyi Ubah lost 2-0 against Kotoko's arch-rivals Hearts over the weekend.