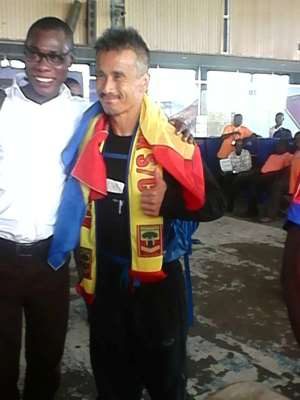 Pressure eased on coach of Ghanaian giants Hearts of Oak on Sunday when they they grabbed their first win of the pre-season after defeating Nigerian top-flight side Ifeanyi Ubah 2-0 in a friendly in Accra.

Japanese coach Kenichi Yatsuhashi was rumoured to be on the verge of being sacked if the former African champions failed to impress during Sunday's game.

That is because the Phobians have struggled to put up a good showing in the off-season as they have suffered several embarrassing defeats since he took over from Turkish manager Can Vanli after the end of the season.

However, goals by highly-rated debutante Samudeen Ibrahim and talented Thomas Abbey sealed the hard-fought victory for the Accra-based side in the match played at the Ohene Djan Stadium in the nation's capital.

The victory eased the pressure on Yatsuhashi who has been teetering on the brink of a sack following unimpressive showing of the Phobians throughout their pre-season matches before Sunday's game.

Teachers Are Better Off Under NPP Than NDC — Education Minis...
34 minutes ago

COVID-19 Still With Us, Follow Protocols – Okoe Boye To Ghan...
42 minutes ago