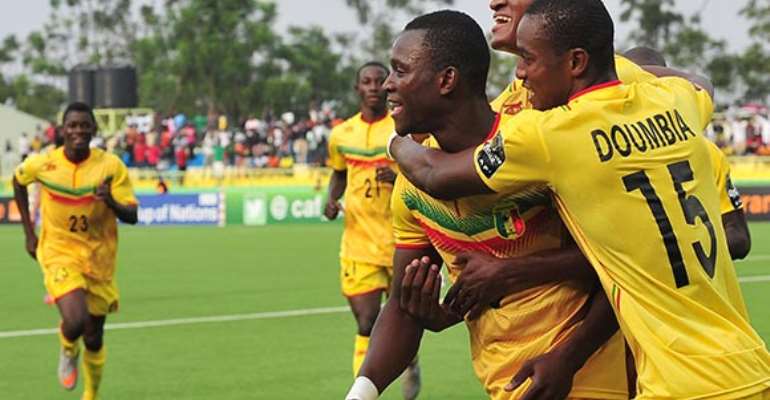 Two second half goals by Aliou Dieng and Abdoulaye Diarra were enough to book Mali a ticket in the 2016 CAF African Championships semifnals as they beat Tunisia 2-1 at the Stade Regional Nyamirambo in Kigali on Sunday afternoon.

Although Ahmed Monser scored for the Carthage Eagles in the first half as they dominated the proceedings, it was disappointing for them to lose them encounter.

Towards the 10th minute, the Eagles defender Aboul Dante was alert when he intercepted a dangerous ball through to Ahmed Akaichi as Mali were a bit exposed in the right back position.

Just after 13 minutes of action, Mali wasted a beautiful opportunity when Abdoulaye Diarra took a long range shot, but keeper Rami Jeridi produced a fine save to concede a corner.

A minute later Monser put Tunisia ahead when he converted a pin point cross from the left with a powerful header, 1-0.

In the 23rd minute Tunisia struggled to contain Mali and Mamadou Coulobaly disappointingly wasted a wonderful opportunity to level the scores when he failed to hit the target from a good position.

With 13 minutes remaining in the opening half, Ben Amor tried a long range shot after seeing Diarra off his line, but his attempt went wide.

It was 1-0 at the interval.
At the start of the second half the Malians were the better side as they were chasing an equaliser, but they struggled to fashion decent goal scoring chances.

In the 65th minute substitute Kouame produced Koita with a great through ball, but the latter failed to hit the target as he tried to chip the keeper, but it went too high.

The match took a turn in the 69th when Mali were handed a penalty after Zied Boughattas was adjudged to have handled the ball inside the box.

Aliou Dieng converted from the spot to equalise for the Eagles, 1-1.

With ten minutes to go Abdoulaye Diarra put the Eagles in front when he made a great run down the left flank and into the box before finishing with his right foot.

The Eagles were under pressure in the dying minutes of the match, but managed to emerge as victors to book a semifinal date against Cote d'Ivoire.