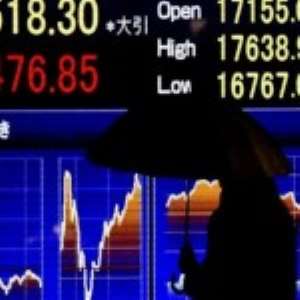 In a surprise move, the Bank of Japan has introduced a negative interest rate.

The benchmark rate of -0.1% means that commercial banks will be charged by the central bank for some deposits.

It is designed to encourage them to use their reserves to lend to businesses in an attempt to counter Japan’s economic stagnation.

The charge does not directly apply to ordinary customers’ accounts.

The country is desperate to increase spending and investment. Desperate

One of the side effects of a moribund economy is falling prices – something that can send an economy into a downward spiral as customers hold off spending in the hope prices will fall yet lower.

Japan has been desperate to boost consumer spending for years. At one point it even issued shopping vouchers to stimulate demand.

The eurozone has negative interest rates, but this is a first for the third-largest economy.

It is a move that has been on the cards for Japan’s stagnating economy for well over 10 years.

The decision to go negative came after a narrow 5-4 vote at the Bank of Japan’s first meeting of the year on Friday.

“The BoJ will cut interest rates further into negative territory if judged as necessary,” the Bank of Japan (BoJ) said, adding it would continue as long as needed to achieve an inflation target of 2%.

.
Some analysts have cast doubt over how effective the rate cut will be.

In a press conference, the BoJ’s governor Haruhiko Kuroda said the weakening growth rate of the global economy was the main factor behind the move: “Japan’s economy continues to recover moderately and the underlying price trend is improving steadily… further falls in oil prices, uncertainty over emerging economies, including China, and global market instability could hurt business confidence and delay the eradication of people’s deflationary mindset.”

Earlier in the day, fresh economic data had again highlighted concerns over economic growth. The December core inflation rate was shown to be at 0.1% – far below the central bank’s target.

Asian shares jumped and the yen fell across the board in reaction to the announcement. Japanese banks though saw their shares drop on the news as lenders are likely to see their margins squeezed even more. Last resort

There are doubts, however, over how well the new policy will work.

“Negative interest rates are one of the last instruments in the BoJ’s tool box,” Martin Schulz of the Fujitsu Institute in Tokyo told the BBC. “But their impact is unlikely to be strong.”

Mr Schulz cautioned that in the eurozone, negative interest rates are being used to tackle a financial crisis, whereas Japan is in a protracted slow growth environment.

“In Japan, credit didn’t expand not because banks were unwilling to lend but because businesses didn’t see the investment perspective to borrow. Even with negative interest rates, this situation will not change.”

“Businesses don’t need money – they need investment opportunities. And that can only be achieved by structural reforms, not by monetary policy,” he said.

The decision comes in addition to the BoJ’s massive asset-buying programme, which over the past years has failed to boost growth.

Bill Blain, of Mint Partners, said monetary authorities’ moves to ever-cheaper money since the financial crisis that began in 2008 have distorted global markets – and investors were uneasy: “Investors are worried that the only place we’ve seen any inflation has been in financial assets, things like stocks, property and bonds. And as a result everyone is suddenly worried they are sitting on nightmares.”

#EndSARS: Rawlings Urge Nigerians To Use Non-Violent Engagem...
14 minutes ago