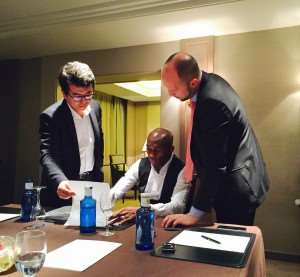 Cameroon skipper Stephane Mbia has joined the many great African footballers who are already playing in the Chinese Super League by signing for Chinese side Hebei China Fortune F.C, GHANAsoccernet.com can confirm.

Stephane, 29, signed a three-year contract with the Chinese giants for an undisclosed fee but is expected to bag twenty-five million Euros [â‚¬25m] for the three years.

Mbia who terminated his contract with Turkish side Trabzonspor signed a three year contract with the Chinese giants which will see him at the club till 2019.

The captain of the Indomitable Lions will join other great Africans stars like Asamoah Gyan of Shanghai SIPG and Yao Kossi Gervinho who also signed for Herbei Chona Fortune FC.

Mbia who had a splendid season with Sevilla two seasons ago joined Trabzonspor in the Turkish league but information available to Ghanasoccernet.com has it that he had to terminate his contract as the Super Lig side were inable to meet their contractual agreements.

Stephane is expected to lighting the Chinese league with his vast experience in African football as the captain of Cameroon and as the back-to-back winner of the Europa League with Sevilla in 2014 and 2015.

The conbative and talented midfielder has help stints with French giants Olympique Marseille and English side Queens Park Rangers before moving to Spanish side Sevilla.

Stephane won the French Ligue 1 with Olympique Marseille in 2010 before carrying Sevilla to the Europa League title in 2014 and defending it in 2015.

Stephane is expected to be unveiled in a few days time by the Chinese giants.