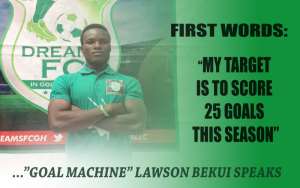 Bekui, who joined the newly-promoted Ghana Premier League side from second-tier Hot Steel, wants to score double-figures this season.

'First and foremost I will like to help Dreams FC maintain their Premiership status and if possible win the league just like Aduana did in their first season," he told the club's official website

"Furthermore, on a personal note I have set a target of 25 goals in the coming season and I know with hard work I can achieve that.'

He netted 13 goals in 16 outings for the Division One League side last term.