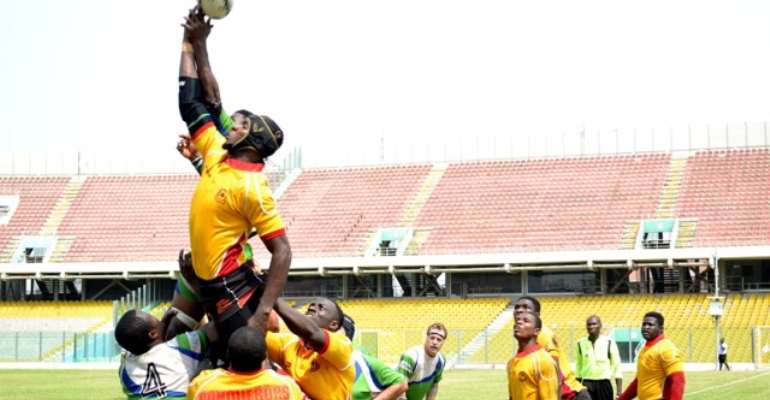 The penultimate round robin matches of the Ghana Rugby Club Championship (GRCC) on Saturday 23 January 2016 again thrilled spectators with 123 points scored in two matches at the Accra Sports Stadium and the Robert Mensah Stadium in Cape Coast.

In Accra the newly formed but unbeaten club in the Ghana Rugby Club Championship (GRCC), Conquerors SC, has overpowered its opponent Idas Sports RFC with 9 thrilling tries on Saturday 23rd of January 23, 2016 at the Accra Sports Stadium.

The two teams who happens to be among the strongest clubs in this league season of the GRCC gave each other a hard time with quality Rugby play beyond expectations.

Idas, the team that has most of its players being expatriates with much experience saw their team conquered by the Conquerors in a margin of 57- 0 after the final whistle.

According to Abdul Rahman Salisu, captain of Conquerors SC, the Idas’s side gave them a tougher game than what they anticipated but the team was able to win due to the tactical play that got the opponent frustrated.

He cited today’s match as the most difficult one in the history of the club adding that beating Idas has boosted their enthusiasm to take on any team in the League.

He said the club will continue with training to improve their style of play in upcoming matches in the second leg of the league.

“Today’s game was very tough compared to our previous matches that we played but I’m happy that at the end we won the game. We are not going to rest but train more because we know we have more work to do in this second round of the league”, he uttered.

The day kicked off with the kids training session followed by a U18 boys match and a ladies match.

Conquerors will be playing their next match against another unbeaten side and defending champions, Cosmos Buffaloes RFC, come Saturday 30th of January at the Accra Sports Stadium.

In Cape Coast the two Cape Coast teams, Griffons RFC and UCC Spartans RFC, locked horns with a convincing victory of 61 to 5 by the Griffons over the Spartans in the main event of the day.

UCC Spartans drew first blood by scoring a quick try in the first 15 minutes of the game. Griffons replied with 2 tries and by the end of the first half Griffons was up with 30 point to 5.

In the second half the Spartans had few answers to the onslaught by the Griffons who attacked the Spartans line relentlessly in their last match of the 2015/16 Club Championship.

UCC Spartans who currently is last on the log will face Dansoman Hurricanes next week in their last GRCC match as they have no chance of proceeding to the semi finals.

In the curtain raisers to the GRCC match the young stars were again given the opportunity to showcase their skills with a match between the Dennis Foundation Community Under 17 team who played against the Griffons female team.

The match, which was fun to watch and which provided a lot of excitement, ended with the boys scoring a 28 to 0 victory over the ladies.

This match was followed an Under 17 boys match between teams from the Dennis Foundation U17 the Griffons that was won with 40 points to 25 by the Griffons team.

The last matches of the 2015/16 GRRC slated for Saturday 30 January 2016 is already creating huge excitement as it will feature the long awaited match between Cosmos Buffaloes RFC, the 2014/15 Champions, and newcomers Conquerors SC.

Both these teams are unbeaten in the 2015/16 GRCC with 5 bonus points each that places them jointly on top of the log with 25 points each. The winner will face Idas Sports RFC in the semifinals while the loser will do battle with Dansoman Hurricanes RFC.

Should there be a draw between Buffaloes and Conquerors team Conquerors will occupy the top spot due to a superior point difference between the teams.

In other Rugby developments the past two weeks an Africa Rugby delegation visited Ghana to assess how they can support the Ghana Rugby Football Union (GRFU) to improve both its best practice governance model and the Union’s technical capabilities through coaching and referee training.

In the CentWest Zone major strides were made with the “Get Into Rugby” youth development programme of World Rugby when both the Holy Child Secondary School and Wesley Girls SHS adopted Rugby as official school sport.