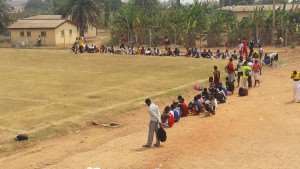 Close to about 70 players who were not allowed to take part in the National U17 justifiers which took place at the Opoku Ware Senior High School in the Ashanti Region have accused Paa Kwesi Fabin for being selective.

According to the boys who were complaining bitterly, the technical team of the national U17 did not allow them to take part in the exercise with the reason that they are older than the required 17 years.

However, they saw other boys, who they could figure out, were older but the coach allowed them to play, hence accusing Paa Kwesi Fabin for applying favouritism in his selection.

Explaining the incident, one of the boys who claimed he came from Ejisu but did not want to mention his name said 'We were told that we are older than 17 meanwhile I am not. We are about 70.'

'All those sitting there [pointing to a direction] were not allowed to take part in the exercise by the coach but he allowed some who are even older than us to take part,' he added.

But Paa Kwesi Fabin, when questioned, said the boys were actually older looking at their faces, disregarding the calls that he favoured others.

'I have been doing this exercise for so many years now and I can tell an over-aged player looking at his face. So those saying they were not fairly treated are only crying foul but they were actually old,' Paa Kwesi Fabin protested.

The last phase of the exercise will continue tomorrow at the same venue for the coaches to make their final selection.