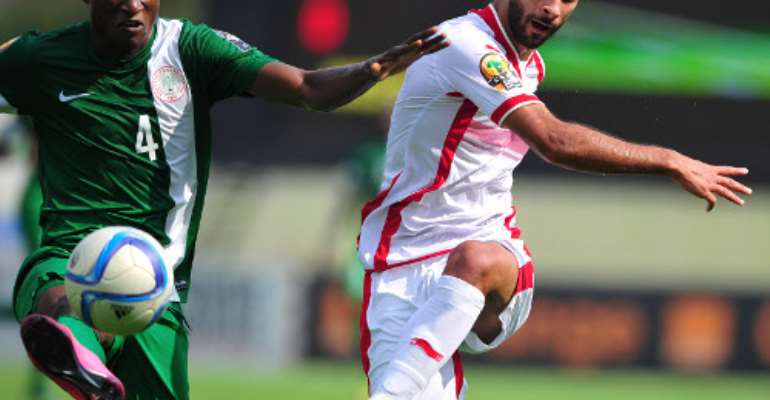 Nigeria and Tunisia at the CHAN.

Nigeria remain top of CHAN 2016 Group C after a 1-1 draw with Tunisia on Friday afternoon at the Stade Regional in Kigali.

The Super Eagles have four points from two matches, while Tunisia are second on two points pending the outcome of the other group game between Guinea and Niger later today at the same venue.

On Tuesday, Nigeria will face Guinea, while Tunisia take on Niger in the final group games to determine the quarterfinalists from this pool.

Chisom Chikatara scored his fourth goal to give Nigeria the lead against the run of play, but Tunisia drew level through danger man Ahmed Akaichi after 70 minutes.

The exciting Chikatara was set up by man of the match Osas Okoro to make hay and had the result stayed like this, Nigeria would have joined hosts Rwanda and DR Congo into the last-eight.

However, the North Africans stayed in contention for a place in the knockout stage of the competition when Akiachi turned sharply inside the box to fire home after he was set up by co-striker Essifi, who was brought in to improve Tunisia's attack.

Tunisia piled pressure in search of a winner thereafter with a diving Ezenwa deny Hamza Mathlouthi a minute from full time.

The Carthage Eagles of Tunisia dominated play and their goal by Akiachi just before half time ought to have stood after television replays showed the ball had not crossed the line before it was crossed for the Etoile du Sahel striker to head past Nigeria goalkeeper Ikechukwu Ezenwa.

The first half therefore ended  goalless with Nigeria playing below par.

The North Africans started the game the brighter of the two teams and Nigeria goalkeeper Ikechukwu Ezenwa had to pull two big saves in the 14th and 27th minutes to deny Tunisia.

Nigeria's biggest chance was in the 11th minute, when Ifeanyi Matthew powered a shot from inside the box which goalkeeper Rami Jeridi somehow got a hand to.

The Eagles dangerous runs down both flanks were missing as both Prince Aggreh on the left and Osas Okoro on the right failed to go behind the Tunisia back four.

Aggreh would later be replaced late in the game by Ezekiel Bassey.

Orji Kalu stabilised the shaky Eagles defence when he came on at the start of the second half for Stephen Eze to curtail the danger posed by Akaichi.