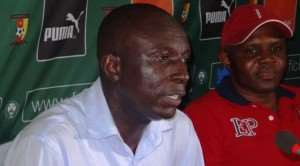 Head coach of Sekondi Hasaacas Yusif Basigi has hailed the capture of former Ghana Premier League goal king Eric Bekoe, saying 'he is a great addition to my side'.

Bekoe made a transfer day deadline move to the Sekondi-based side after his pu4ported move to Accra Hearts of Oak hit a snag.

The former Asante Kotoko striker is believed to have pen a year deal with the twin-city side and the head coach of the side has hailed the new signing.

Speaking to GHANAsoccernet.com, Basigi commended the President of the club for securing the signature of the goal poacher insisting he will add more to his side.

"It is a great relief to me securing such a striker. Bekoe is not just a striker, he is a real goal scorer and we all know that.

Since we were sure of loaning Samuel Afful and Frederick Quayson, we needed a better replacement. And in Bekoe, we have that."

"I have spoken to him after his registration and his level of intelligence and readiness to prove his critics wrong is a great addition to the team. It is a great capture and I am really happy," Basigi said.

Bekoe won the goal king with Asante Kotoko in 2007 and last played for Berekum Chelsea before returning to Morocco for a short stint with Kenitra FC.