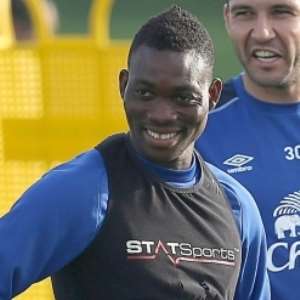 
Chelsea are reportedly close to agreeing on a deal with Levante for Ghana winger Christian Atsu.

Atsu, 24, is back in Chelsea after a failed loan stint with newly-promoted Bournemouth.

The English champions recalled the Ghanaian due to lack of game action with the Cherries.

It had been claimed last week that Levante were leading the race to sign the hugely talented winger on loan.

Fresh reports are emerging that Chelsea are extremely close on agreeing a deal with the Spanish outfit for the Black Star man.

The Spanish side want the Ghanaian wideman on loan for the rest of the season and it seems likely the Blues will let him go after his struggles in England.

Atsu spent the first half of this campaign on loan with Bournemouth, failing to break into the side, and faces plenty of competition for places at Stamford Bridge.

According to Cadena Ser, Levante are leading the race to sign the 24-year-old, though Bundesliga outfit Hamburg are also interested.