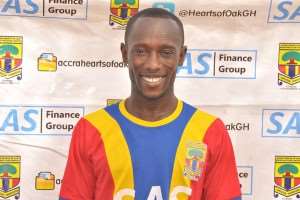 The talented midfielder signed a two-year contract with the Premier League newcomers and is expected to replicate his blistering form for the Phobians to push the newbies.

Hayford, 23, was transfer-listed by the former African champions on the basis of indiscipline but the player took to social media to respond to an accusation he referred to as 'false'.

The Kweiman-based club beat the transfer deadline to register the versatile midfielder who was considered by fans of his former club as one of the best players of the club.

Confirming the news to GHANAsoccernet.com, Administrative Manager of the club Aminu Sahrdow said, "We have signed Emmanuel Hayford and we hope his signature will be a great addition to the team."

Hayford becomes the eleventh player signed by the Premier League entrants ahead of the 2015/16 season.