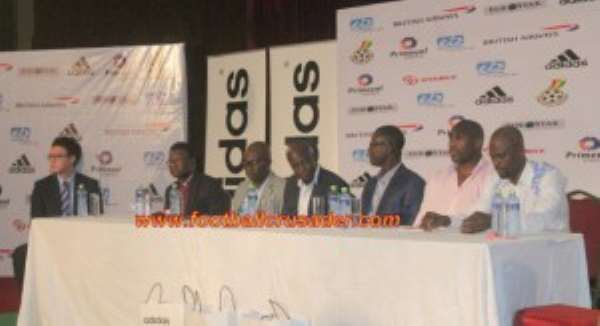 The 2016 Peace Match was officially launched at the Banquet Hall of the State House on Monday night.

The event which was to formally launch the series of activities in the 2016 Peace match, was well attended by several dignitaries including officials of the Ghana Football Association, Parliamentarians, officials of the National Peace Council the Arsenal Supporters Group of Ghana, as well as the media.

Addressing the gathering, the president of the National Peace Council, Rev Professor Emmanuel Asante, who is also the Presiding Bishop, Methodist Church Ghana, mentioned that Ghana cannot afford to lose its peace because of politics and urged all Ghanaians to do all they can to ensure peace in the country before, during and indeed after the December 7 elections.

'We have only one Ghana and it is up to you and me, to make sure we keep the peace. That is why when Primeval Media came up with this wonderful idea, I wholeheartedly supported it and will help to see it to its fruition in June when the matches proper and the event will be held.'

'The doors of the National Peace Council is open to anything that has to do with the peace of our dear country, so I want to state here that Primeval Media and Stephen Appiah have our full support.'

He later officially appointed Stephen Appiah as a peace ambassador for the upcoming general elections.

Appiah in his speech mentioned that he thought it wise to come up with this idea with the help of Primeval Media because he knows the tension that normally greets election season in Ghana, adding that h believes, using the passion of the nation which is football, Ghanaians will appreciate the message of peace better.

'Football is the only thing that brings us together as a nation even when there's tension in the political arena. Myself, Sol Cambell and George Boateng have taken it upon ourselves to preach this message of peace to all Ghanaians ahead of the December elections and we believe that the two games that we will host in June will go a long way to bring unity among Ghanaians.'

England international and former Arsenal legend Sol Campbell was full of praise for the organizers of the event and promised to support in any capacity. He expressed delight at the invitation of Stephen Appiah to help in the launch of this great project that is aimed at fostering unity among Ghanaians irrespective of the political affiliations.

Also present at the launch was the outgone Minister of Youth and sports Dr. Mustapha Ahmed and Vice President of the Ghana Football Association, George Afriyie.

They all pledged their respective associations' full support for the launch as well as the two matches that will be played in June 2016.

Dr. Mustapha Ahmed after a short speech officially launched the 2016 Unity Match with the help of Stephen Appiah, Sol Campbell and George Boateng.