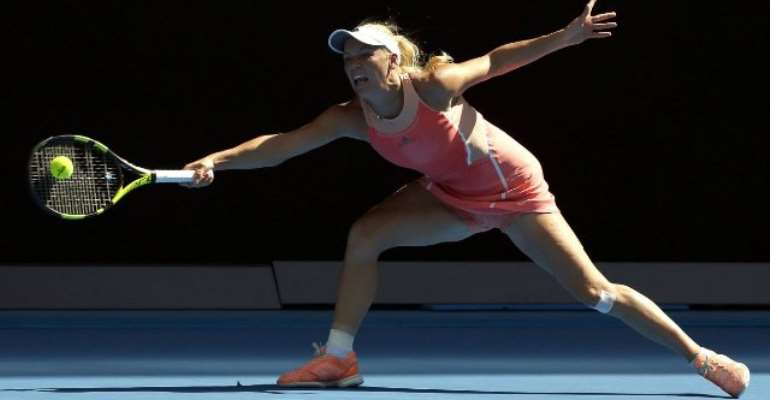 Wozniacki crashes out
Yulia Putintseva bt Caroline Wozniacki 1-6 7-6(3) 6-4 - Caroline Wozniacki went out of the Australian Open after a stunning collapse in her first round match against Kazakhstan's Yulia Putintseva. Woziniacki, a former world number one, looked in total control as she claimed the opening set of the match for the loss of just one game, and still seemed a likely winner as the second set drifted towards a tie-break.

But world number 76 Putintseva claimed the breaker to force a deciding set, by which point Wozniacki - who had treatment on her ankle during the match - appeared exhausted in heat so intense the hot weather rule almost came into play. The world number 18 lost her serve in the opening game of the final set, and despite fighting back she lost her serve once again at 4-4 as she left a Putintseva lob when she could easily have smashed. That gave the Kazakh another break, and she served out for a spot in the second round.

Djokovic crushes Chung
Novak Djokovic bt Hyeon Chung 6-3 6-2 6-4 - If there was any thought that Djokovic would try to ease his way into the Australian Open, he put that speculation to rest in his opening match in Melbourne. The Serbian looked every bit as good as he did in last year's dominant campaign, serving well, returning as good as anyone around and driving Chung around the court for three sets.

Djokovic absolutely crushed the Korean, out-playing his opponent in every facet to start off the tournament with a straight set victory. The No. 1 seed is searching for his six career Aussie title, and he couldn't have started his tournament any better.

Serena starts with routine win
Serena Williams bt Camila Giorgi 6-4 7-5 - Williams wasn't at her best in her first match since last year's U.S. Open, but she was plenty good enough to make relatively easy work of Giorgi. The American wasn't at her best, or even dominant, but she was always better than Giorgi. An early break was all she needed to take the opening set and while the second set wasn't as easy for her, a break at 5-5 was the separation she needed to take the match. Williams won't be thrilled with her play, or that it took her nearly two hours, but Giorgi was a tough draw and the American was always the better player so, all in all, it was a solid day at the office for the No. 1 seed.

Nishikori dominates Kohlschreiber
Kei Nishikori bt Philipp Kohlschreiber 6-4 6-3 6-3 - Nishikori looked extraordinarily sharp in his first match of the tournament, rolling to an easy first round win. Nishikori broke the German four times, and was 50% on break point opportunities, but his serve proved to be the difference at Hisense Arena. The Japanese not only won every service game, he never even faced a break point. With such dominance on the serve, he had no problem dispatching Kohlschreiber in less than two hours.