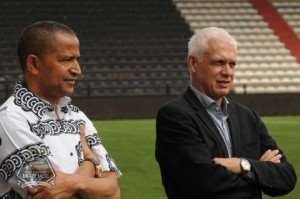 Velud was presented the team at the Lubumbashi training grounds on Sunday morning in the presence of team President, Moise Katumbi.

The former coach of ES Setif and USM Alger had been in Lubumbashi since Wednesday and was at the stadium last Friday to watch the team's win over Pacific Ocean.

Velud and the TP Mazembe have reached an agreement for just a season.

His appointment follows the refusal of of former coach Patrice Carteron to renew his contract as the head coach of the DR Congo giants.

The new appointment means that the five Ghanaian stars will have to impress the new coach to secure starting roles in the set up.

Former coach Patrice has since signed for Wadi Degla of Egypt.