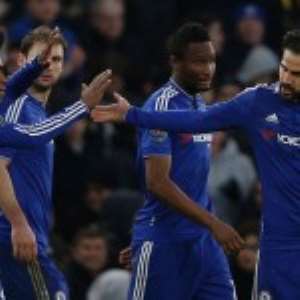 John Terry scored an own goal and then struck deep into second-half injury time to snatch a 3-3 draw for Chelsea against Everton at Stamford Bridge.

Chelsea 3-3 Everton FT
The Blues went behind early in the second half when Leighton Baines’ cross was turned into his own net by defender Terry.

Everton continued to threaten with Ross Barkley hitting the post before Kevin Mirallas lashed past goalkeeper Thibaut Courtois to make it 2-0.

And two minutes later it was 2-2 as Fabregas’ shot was deflected home.

But Everton regained their lead in injury time when Ramiro Funes Mori got on the end of Gerard Deulofeu’s delivery.

With seconds remaining, Terry made amends for his own goal when he tucked past Howard in the eighth minute of injury time.

Manchester City temporarily went top of the table on goal difference as Sergio Aguero scored twice in a 4-0 win over Crystal Palace at the Etihad.

Fabian Delph put City 1-0 up on 22 minutes with a 30-yard strike that skimmed low past goalkeeper Wayne Hennessey.

Aguero scored his second of the game in the 68th minute, tucking home from Kevin De Bruyne’s cutback.

The Argentina international then turned provider as he assisted David Silva who made it 4-0 with a simple finish.

Aston Villa 1-1 Leicester City FT
Leicester climbed back above City at the summit although they had to settle for a point in a 1-1 draw at Aston Villa in Saturday’s evening kickoff.

Shinji Okazaki broke the deadlock in the 28th minute when he scored from a rebound after goalkeeper Mark Bunn had done superbly to claw out Jamie Vardy’s lob.

The Foxes had a chance to take a two-goal lead only for Riyad Mahrez to see his penalty saved by Bunn after Aly Cissokho was deemed to have handled in the box.

But Villa hit back with 15 minutes left on the clock as Rudy Gestede seemed to control the ball with his hand before his shot clipped off Wes Morgan and nestled beyond goalkeeper Kasper Schmeichel.

Two goals from Christian Eriksen ensured Tottenham Hotspur returned to winning ways after their midweek loss to Leicester as they beat Sunderland 4-1 at White Hart Lane.

Tottenham Hotspur 4-1 Sunderland FT
.
Sunderland took the lead against the run of play when Adam Johnson found Patrick Van Aanholt with a fabulous defence-splitting pass and the full-back beat goalkeeper Hugo Lloris at his near post.

Tottenham hit back just two minutes later when Harry Kane’s initial effort was saved and Eriksen’s rebound was only cleared into the roof of the net by Sunderland’s Lee Cattermole.

Mousa Dembele put Spurs 2-1 up when he drove home left-footed past goalkeeper Jordan Pickford, who was impressing for Sam Allardyce’s side.

Eriksen grabbed his second of the game, with his shot from outside the area catching a wicked deflection off debutant Jan Kirchhoff that lifted it into the top corner.

Kirchhoff’s miserable outing continued when he brought down Danny Rose in the box, and Harry Kane stepped up to seal the points from the penalty spot.

Newcastle went in front on six minutes when Georginio Wijnaldum fed Ayoze Perez who found the corner with a placed finish from outside the box.

Wijnaldum doubled the Magpies’ advantage with debutant Jonjo Shelvey key in the move as he found Daryl Janmaat with a stunning long-range pass.

West Ham pulled a goal back four minutes into second half when Nikica Jelavic pounced on a sloppy pass by defender Chancel Mbemba.

The Saints went 2-0 with Ward-Prowse again on the scoresheet as the midfielder converted from the penalty spot after Matt Targett was felled in the box.

Dusan Tadic wrapped up the points when he received Steven Davis pass and then struck low into the bottom corner from an acute angle.

Dan Gosling broke the deadlock in the 10th minute, nodding in from close range following a fabulous delivery by Marc Pugh.

The Cherries went 2-0 up on 52 minutes through Charlie Daniels, who kept his cool from the penalty spot after Pugh was brought down.

Benik Afobe scored his first goal for Bournemouth to seal the victory, slotting home thanks to Charlie Daniels’ assist.