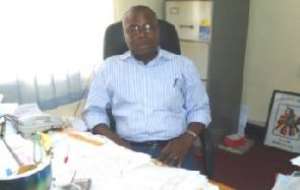 A cross section of Kotoko fans and its leadership has raised eyebrows upon the hearing of the appointment of former Accra Hearts of Oak administrative manager, Ashford Tetteh Oku as the new Premier League Board chairman.

Oku, who has served as vice chairman of the body, will replace the longest-serving chairman of the PLB, Mr Welbeck Yaw Abra-Appiah, who communicated his decision to drop his tools at the end of last season after a 10-year illustrious reign at the helm of Ghana's top-flight league.

GFA president Kwesi Nyantakyi confirmed the appointment of Oku after the Executive Committee settled on the experienced administrator, but the Kotoko fans have raised an alarm over the appointment.

'This man has served the Phobian club over 20 years and definitely will have a soft spot for his mother club any day.

"A typical example is Prosper Harrison Addo who is a fully blooded Hearts person and keeps toeing the interest of Hearts in decisions on disciplinary committee,' the fans reiterated.