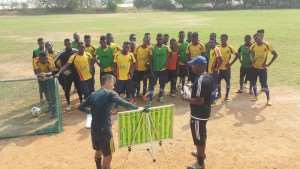 Hearts of Oak Japanese trainer Kenichi Yatsuhashi says he will be happy if the Ghana Premier League will start after three weeks.

The Japanese tactician believes that he will be able to put up a strong side for the league if there is little time for him before the season finally zooms off.

The Ghana Premier League was scheduled to start last month but protracted legal battles amongst some of the club have dragged the date back.

Reports emerged earlier this week that the Ghana Premier League which was tentatively scheduled to come off last month will finally kick off early February.

And the Hearts of Oak trainer says he will be happy if the league starts even at a later date.

'That will be very good for us. If the league will start in three weeks time, then it will provide me enough time to put the team together before the league starts,' Kenichi said.

'My team is improving and I am happy with that.'
Kenichi added that he has seen the steady progress of the side and the team will be a delight to watch when the season starts.