"It's a dream to play for Hearts of Oak" - Samuel Akurugu 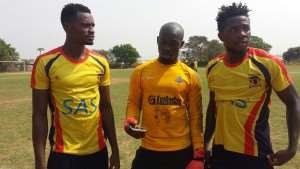 Newly signed Hearts of Oak goalkeeper Samuel Akurugu says it is a dream to don the Rainbow colours.

According to the 25-year old shot stopper, the Accra giants have rich history and every player that gets the chance to play for the club should thank his stars.

Akurugu completed his protracted dream move to Hearts of Oak last Wednesday after signing a three year deal as he will be competing with Soulama Adoulaye for the number one spot.

And Akurugu says it is a dream to play for the former Premier League champions who have gone seven seasons without a major silverware.

'I have just started training with the club and the environment is very cordial. Hearts of Oak has been my dream team and I have had the opportunity to train with them so I'm happy for that,' Akurugu told Ghanasoccernet.com.