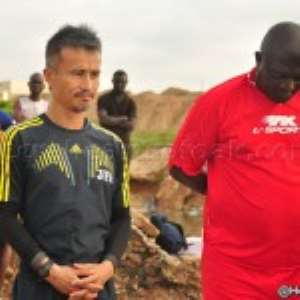 Whether or not Accra Hearts of Oak's expatriate trainer Kenichi Yatsuhashi will continue to be in office will depend on the club's Management's decision today.

The Japanese-American trainer has come under pressure to resign following his uninspiring run with the Phobians since taking over from stand-in coach Eddie Ansah.

Even before he could put his hand to the Hearts coaching job officially, members of the Rainbow family in particular and the sports fraternity in general have questioned his capability, taking into account his track record.

His consistent poor run after failing woefully in his two friendlies in North Africa where the team conceded five goals in  two games; and then drawing one and losing two matches in the GHALCA G-6 tourney recently, has forced the club's management to meet and decide on his future.

The club's supporters front hinted about a massive demonstration earlier, saying they would register their displeasure for the continued stay of the trainer, but indications are that Management are meeting today to decide whether to relieve him of his post or maintain him.

So far, names like Mas-Ud Didi Dramani, former Asante Kotoko trainer and Yusif Abubakar have come up as potential trainers to take over the Hearts coaching job.

Hearts have, in the last eight years, struggled to become the team they were in the early 2000s – one of the continent's fearsome sides.