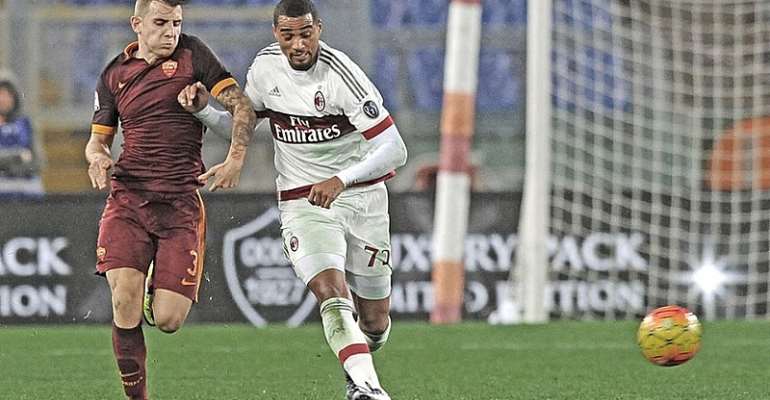 Ghanaian players returned to action over the weekend with striker Abdul Majeed Waris scoring for the second week running for Lorient in France while former Ghana U23 striker Shaibu Yakubu scored for Petrojet in Egypt.

Defender Jonathan Mensah was the subject of a bad performance when Evian Thonon Gaillard were dismantled 4-1 at Clermont Foot in the French Ligue 2.

Meanwhile there was a debut for Kevin-Prince Boateng as he came off the Milan bench to play in their 1-1 draw at AS Roma on Saturday.

GHANAsoccernet.com's El Akyereko has a comprehensive wrap on how Ghanaian players fared abroad over the weekend.

FRANCE
Striker Abdul Majeed Waris scored a 22nd minute goal for Lorient in their 2-2 draw at Stade Rennes on Saturday.

Defender Dennis Appiah was in full time action for Caen when they suffered a 2-0 loss at Angers.

Injured Grejohn Kyei watched from the stands as his Stade Reims were consigned to a 3-1 home loss by Toulouse.

Meanwhile in the Ligue 2, Ghana youth defender Emmanuel Ntim played the full 90 minutes for Valenciennes when they shared the spoils in a 1-1 draw with Auxerre on Friday.

Jonathan Mensah was booked in the 14th minute and replaced in the 17th minute when his Evian TG side were mauled 4-1 at Clermont Foot.

Former Ghana youth captain Charles Boateng was in action for Avranches when they defeated Orleans 3-2.

While former Gefle IF midfielder Joachim Adukor also played for Beziers in their 1-1 draw with Lucon.

Midfielder Kevin-Prince Boateng finally marked his AC Milan return by coming off the bench to play in their 1-1 draw with AS Roma on Saturday.

Midfielder Godfred Donsah was an unused substitute by Bologna who succumbed to a 1-0 home loss against Chievo Verona.

Afriyie Acquah was not in the Torino squad for their 1-0 home loss against Empoli.

Swedish-born Ghanaian Robin Quaison warmed the bench for Palermo in their 1-0 away win over relegation-trapped Hellas Verona.

Kwadwo Asamoah started from the Juventus bench in their away win over Sampdoria.

In the Serie C, midfielder Dennis Kumih was on the Rimini bench when they lost 2-0 at Arezzo.

Young defender Bright Gyamfi was instrumental for Inter Milan Primavera who posted a 2-0 win over AS Roma to reach the Youth TIM Cup semi-final. Samuel Appiah Darko was not in the Inter squad for the game.

Winger Wakaso Mubarak came off the bench to play the last 20 minutes for Las Palmas in their 1-1 draw with Malaga.

Thomas Partey was axed from the Atletico Madrid squad for their game at Celta Vigo on Sunday evening.

Former Asante Kotoko midfielder Michael Anaba was not in the Elche FC team when they held Real Valladolid to a 1-1 draw.

Ghana goalkeeper Razak Brimah manned the post for Cordoba in their 3-1 win over Real Mallorca. Ghanaian defender Kassim Nuhu was not in the Mallorca squad for the game.

Mirandes and Almeria shared the spoils in a 1-1 draw. Midfielder Fatau Mohammed was not in the Almeria squad for the game.

Clifford Aboagye played for Granada B when they drew 1-1 with San Roque. There was neither Richard Boateng nor Jafar Yeboah Ibrahim in the Granada B squad for the game.

FRIENDLIES
Defender Marcel Appiah played and assisted two goals for NEC Nijmegen when they posted a 3-1 win over fellow Dutch side PEC Zwolle.

German-born midfielder Reagy Ofosu played for Chemnitzer when they posted a 4-1 win over Dutch side Graafschap.

Benjamin Tetteh started the game for Standard Liege when they posted a 3-0 win over Mainz 05.

And, triallist Shadrach Eghan scored a 31st minute opening goal for Westerlo in their 3-0 battering of KVVV Coxyde on Friday.

Winger Frank Acheampong played for Anderlecht in their 2-1 loss against Vitesse Arnhem.

Midfielder Asiedu Attobrah finally got to play for Kortrijk in their 4-2 win over Dutch second-tier league NAC Breda.

CYPRUS
AEL Limassol were held to a 1-1 draw by Paphos. Former Ghana U20 invitee Carlos Ohene played in midfield for AEL but his compatriot John Arwuah was not in the AEL squad for the game.

Nea Salamis squeezed out a 3-2 win against ten-man Ermis. And, Ghanaian trio of Chris Dickson, Mustapha Quanyor and Ulyss Ndong all played full throttles for Ermis.

Former Manchester City and Stromsgodset defender Razak Nuhu warmed the bench for Anorthosis Famagusta when they held Doxa to a 1-1 draw.

CZECH REPUBLIC
Former Ghana U20 forward Francis Narh was not in the Banik Ostrava team that lost 2-1 against Sigma Olomouc.

EGYPT
Ex-AshantiGold forward Shaibu Yakubu was on target for Petrojet in their 2-0 win over Ghazl El Mahallah. He was booked in the 73rd minute and scored a minute later.

ENGLAND
Ghanaian international forward Andy Junior Yiadom was sent off in the 59th minute while in action for Barnet in their 1-0 win over Bristol Rovers.

In the FA Cup, forward Jordan Ayew came off the bench in the 71st minute to play for Aston Villa in their 1-1 draw with Wycombe Wanderers.

There was no Andre Ayew in the Swansea City side that lost 3-2 against Oxford United in the FA Cup.

Derek Asamoah was a late substitute for Carlisle United who were held to a 2-2 draw Yeovil Town.

Baba Rahman warmed the Chelsea bench in their 2-0 win over Scunthorpe.

There was neither Joe Dodoo nor Jeffrey Schlupp in the Leicester City side that held Tottenham Hotspur to a 2-2 draw at the White Hart Lane.

Dutch-born Ghanaian forward Elvis Manu started his first game of the season for Brighton & Hove Albion and played 76 minutes in their 1-0 loss at Hull City.

Albert Adomah was in full time action for Middlesbrough as they suffered a 2-1 loss against Burnley.

PORTUGAL
Emmanuel Boateng came off the bench to play for Moreirense when they lost 5-1 at Maritimo. Ernest Ohemeng was unused by Moreirense.

Alhassan Wakaso played full throttle for Rio Ave in their 1-0 win over Union Madeira on Sunday.

Emmanuel Hackmann played at right-back for Boavista when they suffered a 5-0 home defeat against FC Porto.

Former Inter Milan forward Said Ahmed Said played the entire regulation minutes for Olhanense when they posted a 3-2 win over Benfica B.

Ishmael Yartey was influential for Gil Vicente as he played the entire 90 minutes in their 1-0 win at Mafra.

SCOTLAND
Midfielder Prince Buaben Abankwah played the entire duration of the game for Heart of Midlothian when they nicked a 1-0 win over Aberdeen.