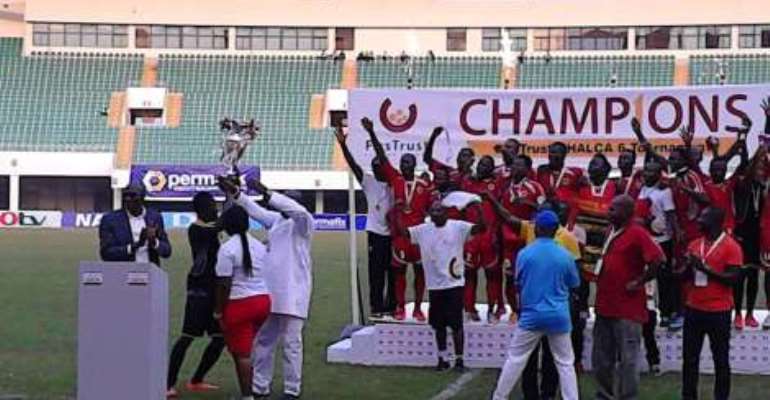 Kumasi Asante Kotoko despite a core of their team travelling to Libya for an international friendly and leaving behind their second string side still managed to beat Aduana Stars by a goal to nil to win the First Trust Savings and Loans sponsored G6 tournament at the Essipon Sports Stadium, Sekondi.

Godfred Saka's penalty kick in the second minute was saved by Ofori Antwi, but Halifa Sadogo who came on as a substitute scored the match winner for Asante Kotoko from the spot kick in the 47 minute.

The first half was an end to end affair, but the game failed to produce much excitement in the half, with the glorious moment coming the way of Aduana Stars, after Elvis Opoku was brought down by goalkeeper Eric Ofori Antwi in the second minute, however, the skipper of the team Godfred Saka had his kick from the spot saved by the former Amidaus goalie.

Kotoko after the first half break doubled their effort and earned a penalty when Elvis Amo was brought down in the 18-yard box, before Halifa Sadogo finished off nicely from the resultant kick with just two minutes into the second half.

The Porcupine warriors, following the goal exerted their control over the game and exhibited great display, but with defeat smiling right on the face of Aduana Stars they upped their game by piling pressure on Asante Kotoko in the closing minutes and could have even secured a late equalizer after their player was heavily brought down in the penalty box, however, the referee refused to award the Dormaa lads a penalty in injury time.

Kwame Boateng, the former, Gt. Olympics attacker, who scored two goals for the Porcupine Warriors was named as the player of the 4-day G6 tournament.

Other award winners were
Eric Ofori Antwi (Kotoko): Keeper of the tournament