Kevin-Prince Boateng: I am grateful to AC Milan for believing in me 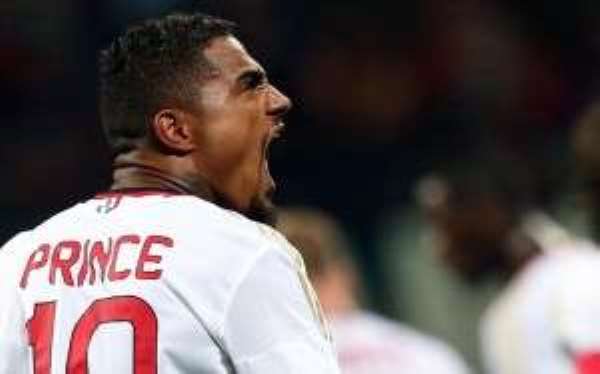 AC Milan midfielder Kevin-Prince Boateng was delighted at making his second debut for the club from the bench during their 1-1 draw away at Roma.

The Ghana international was pleased with the spirt shown by his team-mates and he now hopes to become a leader at the club he left in 2013 for Schalke 04.

“I am very happy because this has been a difficult year for me, there are a lot of people I need to thank: my fiancÃ©, my brother, president [Silvio] Berlusconi and [Sinisa] Mihajlovic,” said Boateng to Premium Sport.

“I don’t know if I made much of an impact but I am disappointed because we could have won the game.

“The team played a great game, we all gave 100 per cent and now we must look to do well on Wednesday [versus Carpi in the Coppa Italia].”

The 28-year-old was also asked about how things have changed since his first spell at the club when he won the 2010-11 Scudetto.

“A lot of things have changed, we lost great players like Zlatan Ibrahimovic and Andrea Pirlo but I’ve seen a united team here, a squad that believes in the work it is doing,” Boateng added.

“It’s difficult when the results don’t come but we have a young side and we need to keep working.”

The German-born midfielder was also questioned about what role he hopes to play at the club.

“I like to play as a trequartista but we don’t use one so I told Milan to play me where they like, I can play in a lot of different positions,” Boateng went on.

“I have some experience and that’s why I’m here, I’m looking to help the team off the pitch and to give my all.”