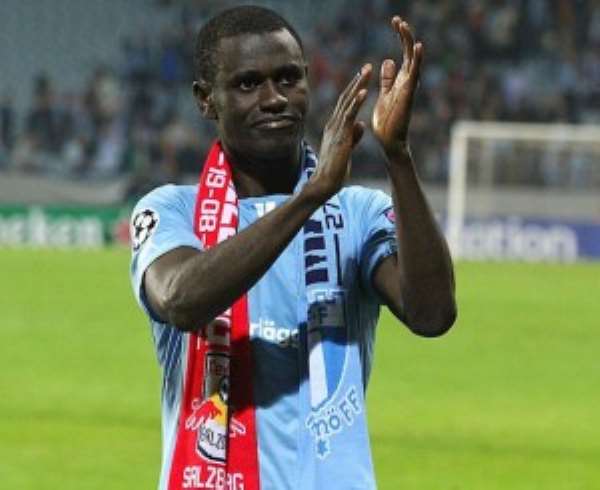 Ghanaian midfielder Enoch Adu Kofi has denied reports that he will be moving away from Malmo FF insisting he has been misquoted.

Reports emerged this morning in the media that the Swedish-based Ghanaian midfielder had hinted of an imminent move away from the dethroned champions.

But the former Nice midfielder insists that he has been misquoted since he did not mean what was reported.

Speaking in an exclusive interview with GHANAsoccernet.com, Adu Kofi said he had noted that only his agent has the key to his movement and that he [the agent] is the only one who can decide his future.

"I did not say I want to move away from Malmo FF. That is not what I said. All I said was that my agent is the boss and he alone has the power to decide where I move to. I never said I was moving away from Malmo FF," Adu Kofi angrily opined.

"As am talking to you now, I have had a lot of calls but I was misquoted. I didn't say I was moving away from Malmo. They have been a good club to me and I must confess they are very professional."

"I am always committed to them until y contract runs out in 2017."

The Ghanaian midfielder has been one of the most sensational players for the Swedish giants making a huge name for himself in the Uefa Champions League.