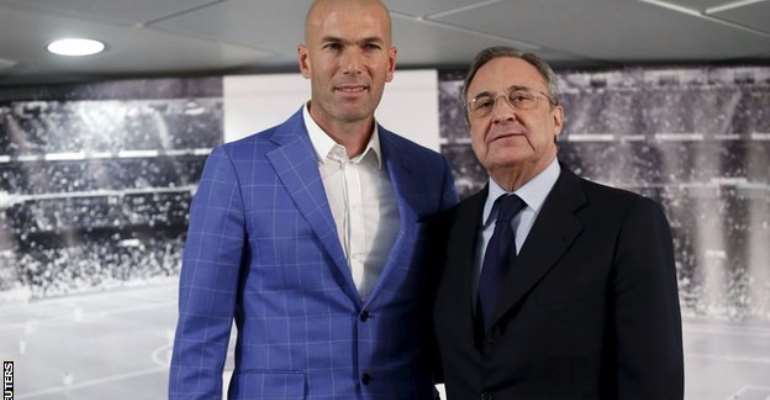 The hiring of Zinedine Zidane as Real Madrid boss on Monday makes the French legend the 11th coach to serve under Florentino Perez during his two spells as club president between June 2000-February 2006 and from June 2009 until the present day.

The 68-year-old has sanctioned the spending of over a billion euros on transfer fees during that time for the return of just two league titles, two Champions League crowns and one Copa del Rey.

Del Bosque was also in charge for Madrid's ninth Champions League victory in 2002.

Carlos Queiroz (June 2003-May 2004)
The Portuguese was already a well-known name due to his position as Sir Alex Ferguson's assistant at Manchester United, but he failed to make a successful transition into the top job at the Bernabeu.

After a promising start, Madrid collapsed to finish just fourth in the league and were also surprisingly eliminated at the quarter-final stage of the Champions League by Monaco.

Jose Antonio Camacho (May 2004-September 2004)
Former Spain boss Camacho returned to the Bernabeu after leaving without so much as playing a game during a 22-day stay as boss in 1998.

However, he didn't last very long the second time around either as a poor start to the league campaign and a 3-0 defeat to Bayer Leverkusen in their first Champions League group game saw Camacho gone by September.

A six-time league winner with Madrid as a player, Garcia Remon was promoted from being Camacho's assistant when the latter left, however his reign also lasted only a few months and he has only had a brief spell in charge of Segunda Division side Cadiz since.

Vanderlei Luxemburgo (December 2004-December 2005)
The experienced Brazilian did at least manage a year in charge after the multiple changes to start the 2004-05 season.

However, he too struggled to find the balance in a squad overloaded with attacking talent and was sacked after a wonderful performance from his compatriot Ronaldinho guided Barcelona to a 3-0 win at the Bernabeu in December 2005.

Juan Ramon Lopez Caro (December 2005-June 2006)
Final appointment by Perez before his first reign came to an end with his resignation in February 2006.

Manuel Pellegrini (June 2009-May 2010)
Backed by Perez's second go at a galacticos project, the Manchester City manager was brought in to oversee the signings of Cristiano Ronaldo, Kaka, Karim Benzema and Xabi Alonso.

However, a 4-0 humiliation at the hands of minnows Alcorcon in the Copa del Rey, elimination to Lyon in the last 16 of the Champions League and second place to Barca despite a club record points tally got rid of the Chilean after one season.

Jose Mourinho (May 2010-June 2013)
Faced with an all-conquering Barcelona, Perez turned to the man that had defeated Pep Guardiola's men on the way to winning his second Champions League with Inter Milan in 2010.

Mourinho's time was filled with controversy and fall outs which ultimately led to his departure from the club after a three-year spell that yielded one league title and a Copa del Rey.

Carlo Ancelotti (June 2013-May 2015)
Ancelotti delivered Madrid's most successful ever calendar year with four trophies, including the long-awaited 10th European Cup in 2014.

However, he failed to deliver a major title in his final season despite a club record run of 22 consecutive victories before Christmas.

His dismissal was, though, Perez's most criticised decision since Del Bosque's departure 12 years previously.