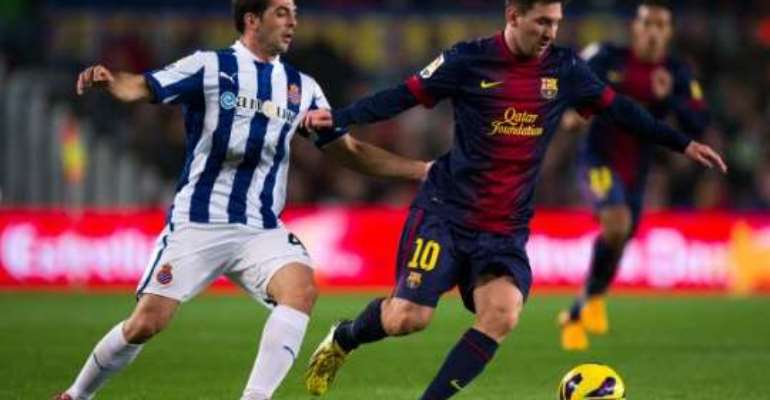 Madrid, Jan. 4, (GNA/dpa) - Barcelona will have another chance to beat crosstown rivals Espanyol Wednesday when they host the first leg of a Spanish Cup fifth-round tie.

Espanyol managed to keep Barca at bay Saturday in La Liga, fighting out a morale-boosting 0-0 draw thanks to a lot of pressing, solid defending, hard work and tactical fouls.

Barca were not pleased with Espanyol's rugged approach and coach Luis Enrique said: "They played right up to the limits of the laws, and sometimes went beyond them.

"They made things very uncomfortable for us, by fair means and foul."

Espanyol president Joan Collet responded by saying: "Their complaints are completely out of line. Both teams played a tough match, that's all there is to say really.

"What they are trying to do with their moaning, I think, is to condition the referee for Wednesday's cup game."

Barca will finally be able to count on Aleix Vidal and Arda Turan, who have been kicking their heels for six months now.

Both players were signed by Barca pre-season but have been unable to play until now because of the transfer ban imposed on the Catalans by FIFA in 2014 for having under-age foreign youngsters in their famed youth scheme.

"I just can't wait to get out on the field. These last six months have been very difficult, to say the least," Vidal said.

"We haven't even been allowed to join in training and practice matches ... Now I just want to be able to help the team, after waiting so long."

Both coaches are likely to ring the changes, with Luis Enrique poised to give a rare start to the likes of Marc-Andre ter Stegen, Marc Bartra, Adriano and Sandro, as well as Vidal and Turan.

Barca are the cup holders and have won the trophy a record 27 times.

The second leg will be at Espanyol's Cornella stadium January 13.

Sevilla and Betis are both in poor form, and Betis coach Pepe Mel is in danger after Sunday's 4-0 meltdown at home to Eibar.

Meanwhile, Rayo coach Paco Jemez has admitted that "the cup is not really my priority right now", given that his team is second bottom in La Liga.

Atletico won 2-0 at Rayo a week ago, on their way to top spot in the league.

Cadiz are the only team from the third division still in the competition. They were given a walkover against Real Madrid in the fourth round due to the Whites fielding the ineligible Denis Cheryshev.