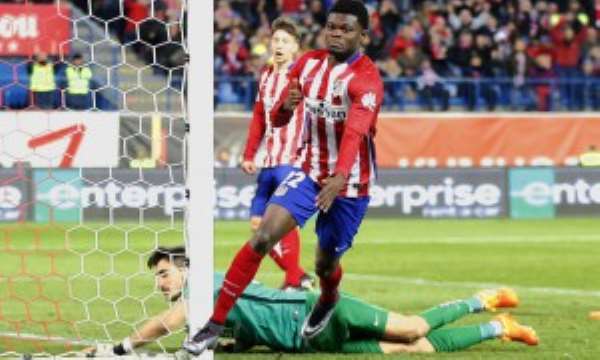 
Highly-rated Ghanaian midfielder Thomas Partey wants to keep his feet on the ground despite his rapid progress at Spanish side AtlÃ©tico Madrid.

Partey, 22, has hogged the headlines after he scored his first La Liga goal as AtlÃ©tico Madrid beat Levante 1-0 at home to go top of the table.

AtlÃ©tico lacked a finishing touch until the Ghanaian midfielder struck nine minutes from time with a shot that squirmed away from Diego Marino, the Levante goalkeeper.

The hugely talented Ghanaian has earned massive plaudits for his fine performances but he wants to keep his feet on the ground.

'The team is playing well and anyone could have got the goal,' Partey, 22, said. 'I am still learning and by working hard I am having more chances to play.'