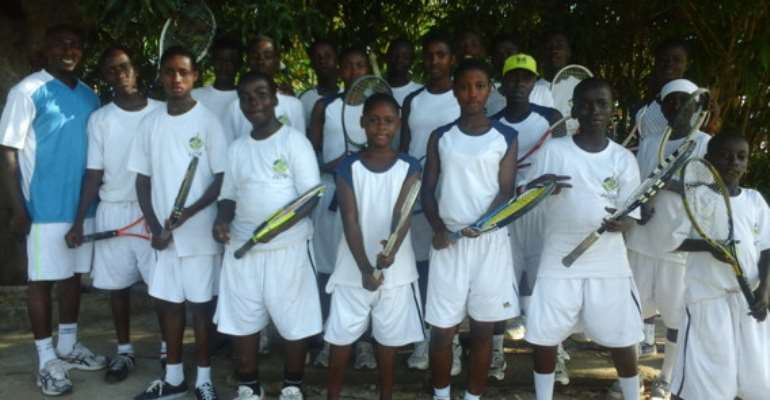 La Constance Tennis Academy established as an afterschool program in Akropong Akwapim barely a year ago has made incredible strides being invited to participate in the ITF Junior Development Program for the under 16,14 and 12 at the Winneba College of Education. The program was organized by the Ghana Tennis Association

Three of the La Constance Tennis Academy Kids, Eric Yeboah, Maximillan Twum and Patrick Asare made it to the semifinals.

Overall about 90 children participated in the program nationwide. La Constance was represented by a team of five kids (Under 14 – Patrick Asare Amo, Maximillan Twum and Theophillus Yeboa; Under 12 – Eric Yeboah and Samuel Koranteng). The passion, energy and the enthusiasm displayed by the kids was incredible. The winners would go on to represent Ghana at the ITF African Junior Championships in Abuja Nigeria. The Coach of the Academy Nana Agyeman praised the Kids and said he had learnt a lot and hope to be back and win the whole thing.

La Constance Tennis Academy was established as an after school program between a collaboration of the Management of La Constance and the Kwakwaduam Association Inc of New York with a mission to develop an interest in tennis at the village level with a hope to getting the kids off the streets while learning tennis. The program has been widely successful. The founder of the program Dr. Kwame Aniapam Boafo praised the Coach and the Manager, Mr Offei for their commitment and devotion to the success of the Academy

The Academy has received tremendous support from several individuals and organizations not to mention Mr. Otu Narko, Kelly Guntherman, Jennifer at Match Point Tennis Club, Solaris Racket Tennis Club both in New York and more importantly Mr. Don HighTower of the Tennis Warehouse and the Kwakwaduam Association Inc of New York among others.

Bawumia's campaign allegedly being financed by NDC to kick a...
33 minutes ago