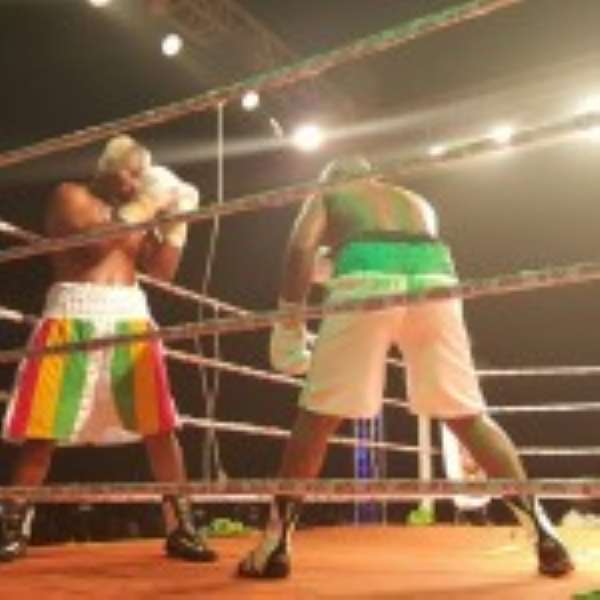 Braimah Kamoko, aka Bukom Banku, has knocked out Ayittey Powers in a special bout in Kumasi on Boxing Day, December 26.

Ayittey Powers took a beating in the opening five rounds and could not regain his composure to return to the ring for round six.

Even though Powers endured the fight in this bout better than he did in a similar bout in Accra against Banku last year, he still could not withstand Banku’s heavy punches.

Banku calmly controlled the exchanges and pounded on his opponent round after round.

At the end of round five, Powers did not make it back for the commencement of the next round, enabling Kamoko to pick up the technical knockout decision.

Banku remains unbeaten, improving his record to 27 wins. He said his next bout would be a world title fight against Brit Nathan Cleverly.

Banku was presented with a brand new SUV Range Rover, a ticket for a holiday trip to South Africa and a cash prize of Ghc100, 000 donated by Joy Industries, producers of Joy Dadi Bitters.

Joy FM’s boxing expert was there for us and sent us this photo report. He was also the ring announcer.

Below: Round 4 – Powers gets a warning from Referee Brenya after he resorts to excessive clinching. The round stated with a flurry of mid-ring exchanges between the two boxers but Banku keeps his effective jabs to the upper body of Powers.

Below: Powers did not respond to the round six bell.

Below: Round 5 – Banku dances his way to his corner after failing to fulfill his prediction of a knock-out. But he won, nonetheless.