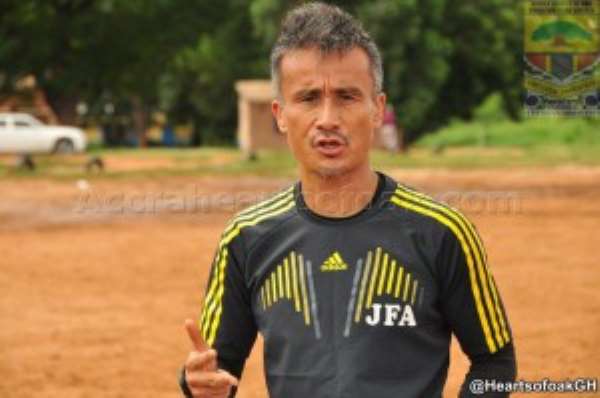 
Hearts coach Kenichi Yatsuhashi has been told he must deliver success in the impending FirsTrust G6 Cup or risk being sacked, GHANAsoccernet.com can reveal.

The 46-year-old is under mounting pressure following the side's unflattering pre-season campaign so far.

The capital-based side have conceded NINE goals and scored just once in three friendly games.

The lack of depth has sparked a wave of disquiet among their teeming fans with fears another Premier League title could slip through their hands.

The Japanese 'amateur' coach has been handed a fresh ultimatum to lead the team to win the FirsTrust G6 tournament or risk being booted out.

The club's majority shareholder Togbe Afede XIV is believed to be unhappy with the choice of the former Aspire academy coach and has demanded answers for the club's uninspiring pre-season form from General Manager Gerald Ankrah.

Yatsuhashi will pay a heavy price if the club fails to win the mini-tournament in Sekondi.

Hearts are housed in group A where they will clash with Medeama and Aduana Stars.

1418 killer lamps removed vehicles in one week
58 minutes ago