Feature: Hearts of Oak arrival shows how for turmoil-hit Libyans, football is like 'water and air' 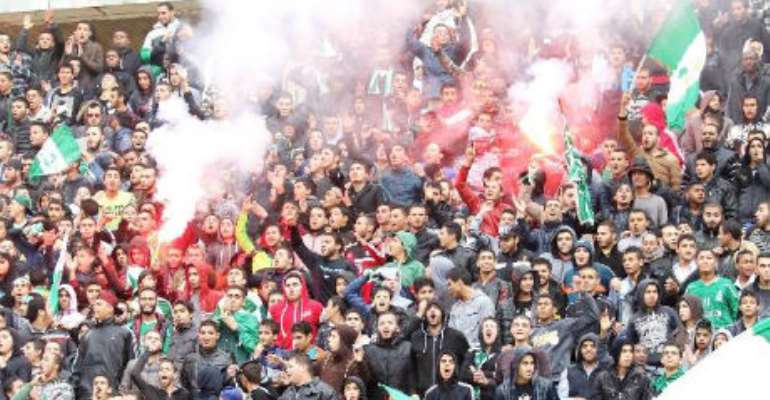 Supporters wave flags during the friendly football game between Ghana's Hearts of Oak SC and Libya's Al-Ahli on December 15, 2015 at the International Stadium in the capital Tripoli

For 90 minutes, Abdel Hamid managed to forget about the war as he, his son and nephew watched Libya's first football clash involving a foreign team in two and a half years.

"For us Libyans, football is like water and air -- the essence of life," he said.

That's why, despite pouring rain, supporters flocked to a stadium in the militia-held capital Tripoli Tuesday for a friendly between one of Libya's top clubs, Al-Ahly, and Ghana's Hearts of Oak.

Waving the flags of Al-Ahly and "Free Libya", which replaced the green flag of the Moamer Kadhafi era, supporters chanted loudly throughout the game.

"It was 90 minutes of joy that we had missed for a long time. Libya does not deserve such a fate," said Abdel Hamid, referring to the turmoil gripping the country.

Libyans are deprived of following their favourite sport up close because the national championship was cancelled and the national team play their matches in Morocco or Tunisia.

It's the result of the chaos that has befallen the country since the overthrow of Kadhafi in 2011.

For a year and a half, two rival authorities, including one based in Tripoli, have fought for power.

The emergence of the Islamic State jihadist group in the North African country has added to the instability.

Many fans in the stands had faces painted in white and green, the colours of the team formerly headed by Kadhafi's football-loving son Saadi, now in detention.

When Al-Ahly notched up their first goal, thousands of supporters rushed to the pitch side to congratulate the scorer.

"The Libyans are big fans of football but four year of turmoil mean we seem to have forgotten the pleasure of the game."

The happy moment was repeated twice more, ending in a 3-0 victory for the Libyan side.

"Today we have given joy to thousands of Libyans who are crazy about football. Politicians must be more attentive to that," said Al-Ahly coach Jamal Abu Nawwar.

"It was not just a game but a message from Libya to the world showing a different image" from that of a country at war, he added.

The crowd urged other foreign sides to follow in the footsteps of the Hearts of Oak.

"The people want African teams to come to play in Libya," the supporters chanted.

For that, they need negotiations between the country's warring parties to bear fruit.