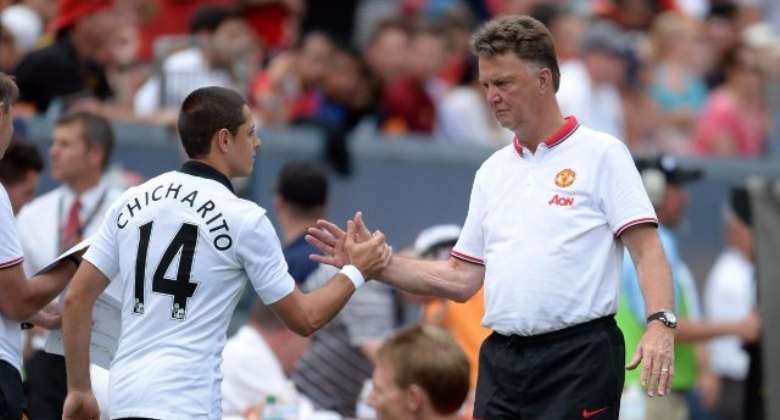 Louis van Gaal told Javier Hernandez he only had a "one per cent chance" of playing up front for Manchester United, the Mexican has revealed.

Hernandez ended a five-year stay at Old Trafford in the summer by signing for Bayer Leverkusen on a three-year deal. The 27-year-old has been revitalised in Germany, scoring 19 goals already this season for club and country.

While United were being dumped out of the Champions League and then losing to Bournemouth, Hernandez was busy scoring against Barcelona and then netting a hat-trick in the Bundesliga.

Hernandez spent last season on loan at Real Madrid after Van Gaal told him to take the right offer if it came up, and the United boss left the striker in little doubt where he stood during the summer.

In an interview with Movistar reported by Marca, Hernandez said: "I spoke with Van Gaal and he said that I only had a one per cent chance of playing in my position, so I headed to Bayer.

"I felt confident from the very first day. I feel important, not just because of my goals, but because I feel that I'll start every game".

Hernandez joined Manchester United from Guadalajara in 2010 and scored 20 goals in his first season, being voted player of the year by the fans.

After Sir Alex Ferguson retired and was succeeded as manager by David Moyes in 2013, Hernandez began to fall out of favour.

He praised Ferguson for his squad management, saying: "I was extremely lucky to be the first (Mexican) player to move to one of the biggest clubs in the world. I had a great time there. I had an incredible start, full of opportunities, although those opportunities dwindled over time and things took a turn for the worse."

"I'm so grateful to Ferguson. I think he's the best there's ever been, especially his squad management skills. Every player had his place. A squad player could still play 15 games a season. He opened the door to Europe for me and I won two league titles there."