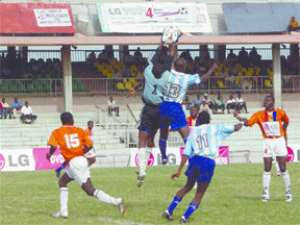 Accra, Nov. 4, GNA - The GT Premier League is gathering much momentum as it draws closer to the end with various clubs striving to confirm their position on the top of their respective zones whilst others battle with the threat of relegation. As the league progresses, clubs battling with relegation will seek to continue with their crusade this weekend after Feyenoord and Great Olympics recorded victories in their last matches whilst B.A. United has become a perpetual figure at the bottom of Zone A and are bound for the wilderness. Aside the above factors, the week's matches have also been characterised by some attractive local derbies which are going to be the source of motivation for fans to fill the stands. Kumasi Asante Kotoko having suffered two successive defeats in almost one week will be confronted with another tall order as they face their city rivals, King Faisal at the Kumasi Sports stadium. A win for Faisal will mean the point margin between the two sides on top of the Zone A' table will be reduced to two whilst the Porcupine Warriors will send their vociferous fans into a state of doubt concerning their continental game against Al-Hilal of Sudan next Sunday. This however suggests a crunchy game, which is a characteristic of the two sides anytime they meet at the Kumasi "Fast Track stadium". As if by divine machinations, embattled Okwawu United will welcome struggling Obuasi AshantiGold at the Mpraeso Brightons Park, which will rekindle the rivalry between the two sides.
Having been badly bruised by some point deductions by the Disciplinary Committee of the GFA, Okwawu United have vowed to punish the Miners with victory.
The current impressive performance of Berekum Arsenals gives visiting B.A. United no chance of survival when they trek to Berekum to face the former.
Giant killers Real Tamale United (RTU) would be the guests of Tano Bofoakwa at the Sunyani Coronation Park to complete the Zone "A" matches.
Accra Great Olympics will have a difficult task at hand when they face leaders Accra Hearts of Oak in Zone "B" at the Accra Sports Stadium.
The "Dade boys" needs nothing but a win against Hearts to improve their standings on the table and possibly reduce the threats of relegation, but whether that is achievable for them remains the biggest puzzle as the two sides descend on the nations Wembley on Sunday. Sekondi Hasaacas will sort things out with Real Sportive at the Gyandu Park, whilst Gomoa Fetteh-based Feyenoord also welcome Liberty Professionals at the Cape Coast Stadium.
Heart of Lions is likely to add another defeat to Power FC as the two clash at the El-Wak Stadium.

"I Took My COVID-19 To Some Registration Centres But I Was V...
3 hours ago