We will defeat the Young Elephants -Nyantakyi 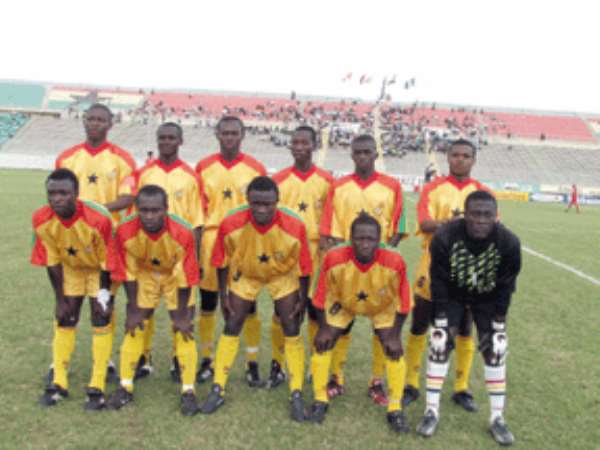 The chairman of the Black Satellites management committee, Kwasi Nyantakyi has stated emphatically that Cote D'ivoire cannot stand between Ghana and the African Youth Champioship scheduled for Benin.

Speaking to Kwabena Kyere Stugard of Space FM in Abidjan after the first training session of Satellites at stade Champroux, mr. Nyantakyi who is also the vice chairman of Ghana Football Association said he was convinced that Satellites would qualify for Benin. " After a nerve wrecking 90 minutes, Satellites would win by 2-1 or perhaps 2-0", he stated confidently.

He said the team is highly motived to deliver the goods on sunday. He was however reluctant to disclose the special package that has been put in place to motivated the boys extrinsically. He told Space FM that the package would be announced after the arrival of Hon. Rashid Bawa this evening. However, Space FM, without taking the sail out of the wind can authoritatively state that the package is much higher than the thousand dollars each player was supposed to have received if they had won the first leg.

In a related the delopment, the manager of the team, Oti Akenten has called for a divine intervention on sunday, saying it is only God who can prevent Ghana from qualifying. " The technical team has done what is humanly possible to ensure a resounding vicory, what is left belongs to God", he said biblically. He quoted Exodus 14:14 as his source of inspiration.

Meanwhile the Ghanaian team had its third training this afternoon with special emphasis on shooting at goal and penalty shoot-out. Felix Baffoe was superb with his terric drives with equally good saves from Prince Antwi. One can only wish that they reproduce such outstanding displays on sunday.

The Federation Ivorriene de Football has been supportive to the Ghanaian contingent. As a sign of kind gesture, they presented twenty cartoons of pure water to the team at plush Ibis Hotel.

Ghana goes into action on sunday with a goal deficit. Kick-off is 1600 hours at Stade Felix Houphouet-Boigny.

Latest Photo Reports
Catch up with all the political quotes from our politicians.
Advertise here
More Football News
ModernGhana Links
African players in Europe: Salah's historic Old Trafford hat-trick
Mohammed Polo speaks on how Milovan Rajevac can qualify Black Stars for 2022 WC
Callum Hudson Odoi aiming to keep his place in Chelsea XI after impressing against Norwich
Ronaldo reacts after Manchester United mauling against Liverpool
I do believe in myself, Solskjaer says after Liverpool humiliation
Growing influence of Ghana’s ‘diasporan’ stars
Caf Confederations Cup: Hearts of Oak to know opponent on Tuesday
'Samuel Boadu will answer some questions' - Hearts of Oak board member speaks after 6-1 demolishing against WAC
CAF CL: 'We are sorry' - Hearts of Oak apologize to fans after 6-1 humiliation defeat to Wydad AC
TOP STORIES

SRC election: National security intrusion is an attack on ac...
11 minutes ago

Police to meet religious leaders on legal implications of th...
11 minutes ago