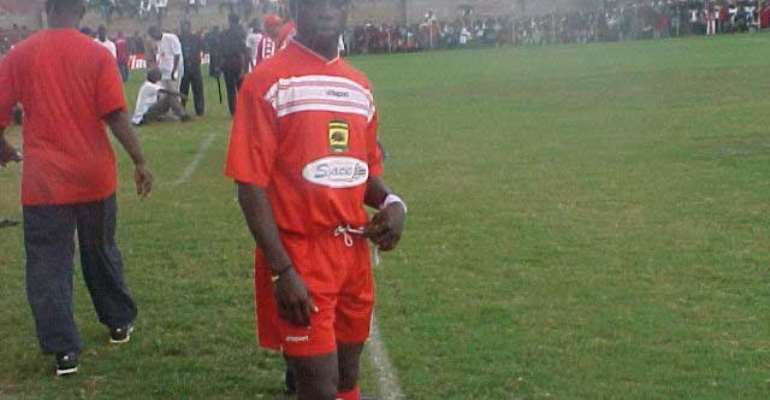 A Memorandum of Understanding (MOU) to that effect was expected to be sealed between the two clubs last Friday.

To underline their determination to beat the other competitors to it, the Asian club are said to have mandated former Kotoko player and coach, Sunday Ibrahim, to represent their interest in the transaction.

The Chief Executive of Kotoko, Major (ret'd) Yaw Ampene Larson, broke the news to the Graphic Sports in an interview prior to the team's departure to Angola last week. According to him, though many foreign clubs have expressed interest in Taylor, they considered the Dubai offer simply because it was the only club out of the lot to have shown more commitment towards signing on the player.

He pointed out that the MOU was only meant to ensure that the player was well catered for by Al Khaleej Sports during the stipulated period.Maj. Larson would, however, not disclose how much Kotoko would earn from the short term deal.He explained that the actual negotiation in respect of transfer fee for the player would be subject to Taylor's performance during the trials.

He, however, stressed that since Kotoko had the welfare of the player at heart, coupled with the huge investment made in him by the club, a good offer for both parties would be paramount in any negotiations.

A source close to the club, when contacted, stated emphatically that Kotoko were expecting nothing less than $350,000 (¢3.150b)transfer fee from the Dubai club. This, the source said, was in view of the various offers which had been made by other interested clubs, with Ghanaian-born Freddy Adu's American Major League side, DC United, for instance, proposing between $400,000 and $450,000.

Graphic Sports investigations also revealed that the player was no longer motivated to play for Kotoko due to the new offer, and therefore threatened to boycott the Angola game even before Coach Hans Dieter Schmidt decided to drop him and Joe Hendricks from his team to Angola.

Taylor, who is arguably the most skillful player on the local scene currently, is well remembered for causing a stir on the local transfer market with a controversial move from Hearts to Kotoko last year which attracted an unprecedented fee of ¢1.2b.

SRC election: National security intrusion is an attack on ac...
29 minutes ago